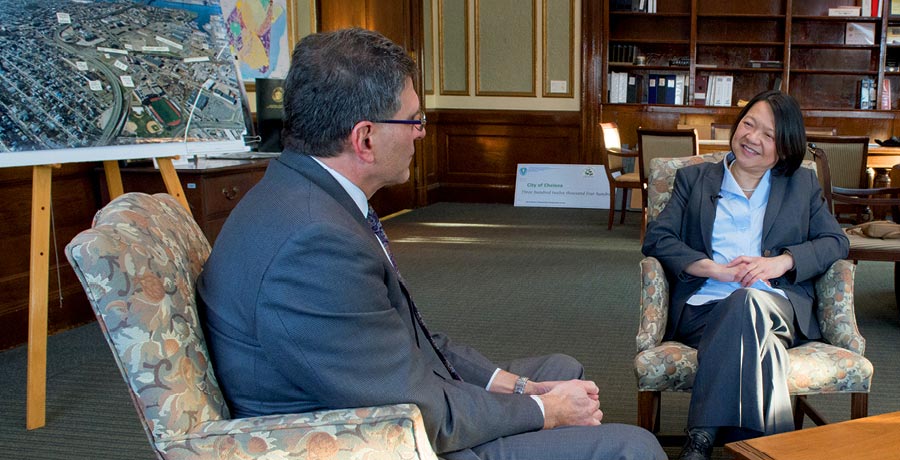 President Eddinger sits down with City Manager Thomas G. Ambrosino to discuss his vision for the City of Chelsea.

Closing in on his third year as city manager, Tom Ambrosino looks to build infrastructure and drive growth for the economy of one of the state’s “Gateway Cities.”

A long-time partner in the community, BHCC has offered courses in Chelsea for three decades. Having outgrown its former location in Chelsea’s Bellingham Square, BHCC’s Chelsea Campus relocated in 2017 to Everett Avenue, where it continues to support the city’s development through career training and workforce development as well as an Early College program for Chelsea High School students.

President Pam Eddinger (PE): You’ve been the Chelsea city manager for three years now, but this is not your first post as a city leader.

City Manager Tom Ambrosino (TA): I was the mayor of Revere for 12 years, which is quite similar to the job of city manager. The difference is the politics—you don’t have to get elected or raise money. You can just focus on the public policy part of the job.

PE: So, over the last three years in Chelsea, what’s surprised you—good and bad?

TA: Initially, I was impressed with how well-run Chelsea was and by the level of professionalism of the staff and the people of City Hall. The financial security of the city was also a pleasant surprise. Its solid financial position allowed me to invest money in the city’s residents and programming. I had the opportunity to do that because those who came before me had put the city on such good financial footing.

PE: Before your predecessor Secretary Jay Ash left office, he introduced me to Chelsea as one of our Gateway Cities. Chelsea has an influx of new residents and the city is on the cusp of growth. Have you seen things burgeoning over the last three years, and what are the challenges and opportunities that come with that development?

TA: Chelsea is an incredibly vibrant city and it is changing in a lot of ways. We have a strong immigrant population from Central America, which brings a lot of entrepreneurship.

We also have a number of young professionals who work in Greater Boston arriving in Chelsea because they’re being priced out of neighborhoods in Boston, Cambridge and Somerville.

We’ve built a fair amount of housing in the city in the last few years, a lot of which is being occupied by these young professionals. This new dichotomy in the city definitely presents some challenges—poverty, housing insecurity, education—that the city struggles sometimes to address. 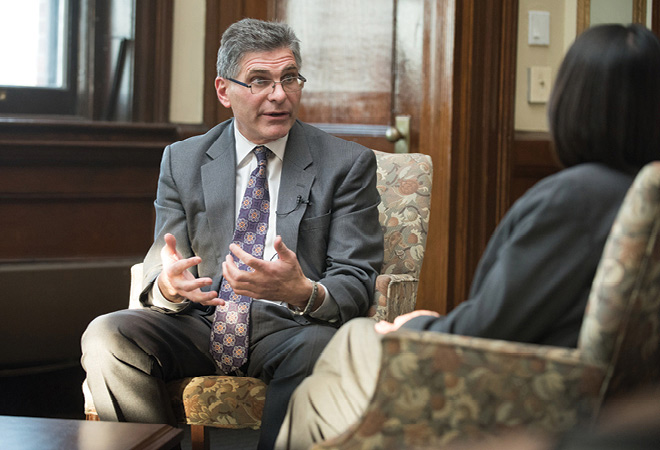 City of Chelsea Sets Aside $150K for BHCC Tuition Program

In April, Chelsea City Council approved a pilot program to extend Chelsea High School’s partnership with BHCC past graduation. Beginning FY 2019, scholarship funds will be made available to students who have completed 12 college-level credits through the high school’s dual enrollment program to complete their associate degree at BHCC. 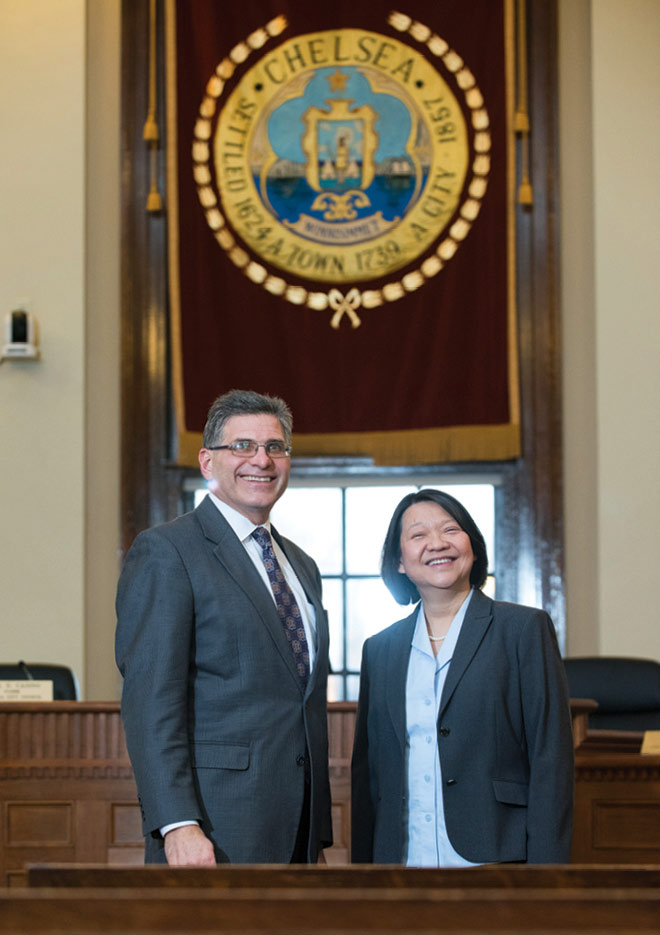 PE: It has always impressed me that Chelsea Public Schools is constantly expanding on its own accord. It’s very forward-looking.

TA: They do a tremendous job, but it can be challenging for the school department to ensure that new arrivals in our classrooms, who don’t always have the same educational backgrounds as those born in the U.S., are quickly brought up to speed and can succeed alongside students who have grown up here. But for the most part, if you’re here for a long time, you will get a very good education in this system.

PE: We certainly have seen that at the College. Chelsea students are hardworking and successful. I am always heartened by the fact that Superintendent Mary Bourque has been thoughtful about a K-16 system, rather than a K-12 system. She nurtures so many Early College students before they come to us.

I know you’re looking for Chelsea’s workforce development to be anchored in the cultural wealth that bilingual citizens bring to the city. Tell me about your vision.

TA: We are trying to strengthen the ability of all of our students to go directly from high school into at least a two-year college degree program, and we’ve done this through the Dual Enrollment program at Chelsea High School with BHCC. Our hope for this year is to create financial support for students who want to continue beyond the program to complete their associate degree at BHCC. We’re exploring ways the city can do that; it would certainly help in workforce development.

We’re also trying to create a more vibrant downtown for our existing businesses, many of which are run by residents who have immigrated from other countries. We’ve committed a lot of money to the infrastructure—a façade improvement program, business technical support. We want to help them thrive and grow and create opportunities for employment for our residents. That’s a big focus of our intentions, strengthening the homegrown businesses in our downtown.

PE: It is critical to create a positive cycle where we foster students, workers and innovators from our local high schools and our local secondary systems who then, in turn, come back to serve in the community and develop the next wave of leaders.

TA: We’re trying very hard to make this a community where students who graduate from Chelsea High School have a reason to want to stay in the city. That requires not just creating a dynamic business community where they might be able to work, but also creating the necessary housing for them.

“
We are trying to strengthen the ability of all of our students to go directly from high school into at least a two-year college degree program, and we’ve done this through the Dual Enrollment program at Chelsea High School with BHCC.

PE: It is critical to create a positive cycle where we foster students, workers and innovators from our local high schools and our local secondary systems who then, in turn, come back to serve in the community and develop the next wave of leaders.

TA: We’re trying very hard to make this a community where students who graduate from Chelsea High School have a reason to want to stay in the city. That requires not just creating a dynamic business community where they might be able to work, but also creating the necessary housing for them.

TA: Creating housing that is affordable for working class residents is a challenge, not just in Chelsea, but everywhere. Our goal is to ensure that we are meeting the needs of our residents by building enough housing in the city, and that the housing we build is affordable.

PE: I’ve noticed that new hotels and businesses are being built in the area. In fact, in one of the projects, the hotel talked to the College about our students being part of their workforce. I see the businesses and industries coming together and supporting this goal and vision.

TA: Hotel business is important to this city given our proximity to Logan Airport. It’s sort of a natural growth industry for us and it creates good jobs across many levels of education.

PE: One of the features that makes our Chelsea Campus unique is that we offer training for many entry-level allied health careers. Healthcare is one of the growing sectors for the Chelsea area. We are also growing the STEM (Science, Technology, Engineering, Math) fields. Where does STEM fit in the city’s business and industry?

TA: There is a small segment of our industry with engineering and science attached to it. Medical manufacturer Acorda is expanding in Chelsea and is looking to grow their manufacturing facility here. We would love to have that industry develop more in Chelsea. And improving the STEM educational opportunities for our young people is going to have its own benefits even if they move beyond Chelsea.

PE: Fast forward three years from now. What are the three big projects we can put on the table and say “Wow, that was really great!”

PE: Think about education and the role of BHCC in the Chelsea community. How can we make a difference?

TA: I‘d like the College to continue its engagement with the community. Your presence is important to this city. As for the seamless connection between students graduating from Chelsea High School and moving toward an associate degree, that’s a path we want to strengthen over the next few years.

PE: Well, you certainly have the College’s commitment. It’s been wonderful having you in this seat. Thank you for your willingness to have an open door to us.