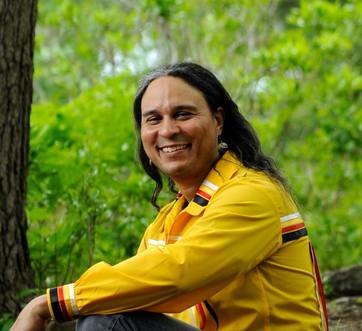 Larry Spotted Crow Mann is Bunker Hill Community College's 2021-2022 Artist and Scholar in Residence. Mann's residency includes a variety of Native American programming. On September 2, 2021, President Eddinger welcomed Larry Spotted Crow Mann at the College's Convocation. On October 1, Mann hosted an in-person retreat for faculty at the Ohketeau Culture Center to learn about Native American culture. Fifteen faculty fellows are consulting with Mann on a year-long project that embeds Native American culture and history into the curriculum. As part of the College's Compelling Conversation's series, on October 5, Mann led an engaging talk focused on the spiritual, cultural, and social significance of 'Place and the Art of Story' on the Indigenous peoples of New England.

Mann will also provide virtual professional development workshops about Native American history, culture, and storytelling. He will develop a short-documentary film about the history and banishment of the Nipmuc people on Deer Island. Mann will facilitate new partnerships among BHCC and Native Americans within the Massachusetts area. He will consult on a culminating gallery exhibit on campus in the Mary L. Fifield Art Gallery and coordinate a Native American cultural component at BHCC's graduation ceremony.

As part of his residency, Mann has authored an original Land Acknowledgement Statement for BHCC and recommends the following action steps:

Larry Spotted Crow Mann is a member of the Nipmuc Tribe of Massachusetts. He is an award-winning writer, poet, cultural educator, traditional storyteller, tribal drummer/dancer, and motivational speaker involving youth sobriety and cultural and environmental awareness. He travels throughout the United States, Canada, and parts of Europe to schools, colleges, powwows, and other organizations sharing the music, culture, and history of the Nipmuc people. He has also given lectures at universities throughout New England on issues ranging from Native American Sovereignty to Identity.