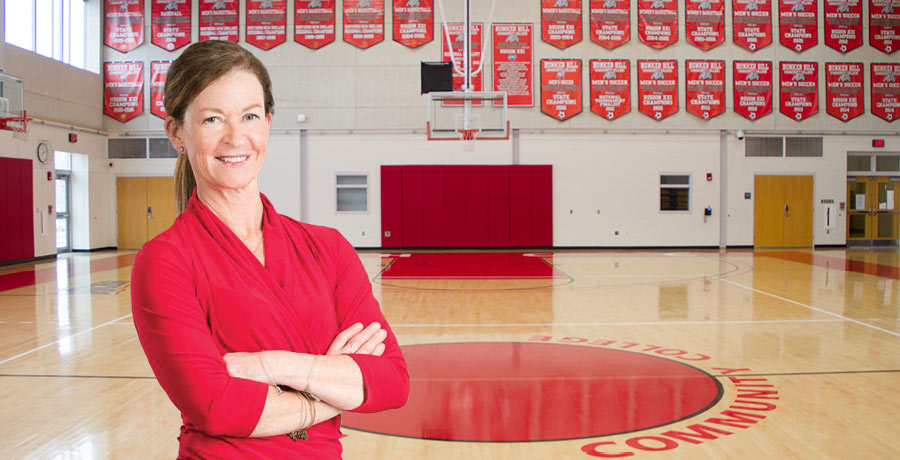 1 on 1 with BHCC Director of Athletics, Loreto Jackson, Ph.D

Inside BHCC’s Health and Wellness Center, 25 championship banners hang on the gymnasium walls. The lobby displays awards, trophies and other accolades celebrating a long tradition of athletics at the College. Dr. Loreto Jackson, BHCC’s new director of athletics, brings with her a vision for BHCC Athletics’ next chapter—one that focuses not just on developing great athletes within the program, but on developing great students and a strong BHCC Athletics community.

In her office, dressed in BHCC’s colors of red and black, Jackson is already planning the schedules of games for next year. Jackson came to BHCC from Clemson University in South Carolina where she was associate athletic director of student-athlete performance. As an NCAA Division I Power 5 college in a “football town,” one might wonder what made Jackson consider a move to BHCC. The answer is family. Seeking to move closer to home, she found an opportunity at BHCC. “The more I learned about the position, the more I felt it met my needs for a new challenge,” she says.

Jackson spent 12 years at Clemson, where she developed the Total Athlete Care and Performance program. The first of its kind, the program addresses student-athlete development from a holistic perspective. “The athletic director and I would talk about athletes falling through the cracks,” Jackson recalls. “It didn’t make any sense to me.” So she developed an integrated program that pulled together nutrition, sports medicine and strength and conditioning with sports psychology, housing and student-athlete development including life skills and leadership.

“It was unusual,” she notes. While most performance programs focus on athletic conditioning and physical and mental wellbeing, few address student conduct and behavior. “I would describe that program as doing everything off the court to help students stay on the court.” BHCC Athletics is a member of the National Junior College Athletic Association (NJCAA) Division III. Six varsity programs are available for student-athletes: men’s and women’s soccer, women’s volleyball, men’s and women’s basketball and men’s baseball. Recognizing the similarities between NCAA Division I and NJCAA Division III participants, Jackson says “Student-athletes want to play, they’re competitive and they love the game. They want to have a good experience, and they want to be supported. That’s the same, no matter where you play.” But BHCC athletes, Jackson has recognized, deal with a number of challenges just to stay involved with the program. “NJCAA Division III does not offer scholarships, so that can be very difficult for our students. We are in a very expensive city for them to live. Some of them have children. Many of them have to work. It’s unbelievable how they manage it all. I really can do nothing but admire them.”

“
When I meet with each of the teams I ask, ‘How are your classes going?’ and ‘What are you struggling with? 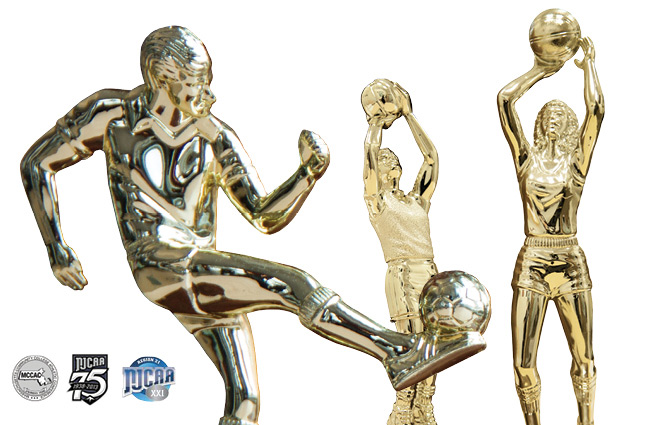 Jackson is looking to build a strong support system for BHCC athletes beginning with Dr. Julie Elkins, Dean of Students, and the coaches of the Athletics Department. “When I meet with each of the teams I ask, ‘How are your classes going?’ and ‘What are you struggling with?’” It is important to Jackson that her staff members—including assistant Joan Rossi, who has been with the College for several years and new Assistant Athletic Director Sercan Fenerci, a former coach—serve in mentorship roles for their students. “I don’t want anyone to drop out of school because there was an issue that maybe we could’ve helped them with. That comes with building trust.”

Jackson also believes a solid support system can extend beyond her staff into the rest of the College community. She challenges the common idea that athletics diverts resources from educational institutions. “I look at athletics as a part of the educational experience,” she says, pointing to key areas where student-athletes are developing skills that are transferable to the classroom and to their everyday lives. “Leadership, teamwork, discipline and time management—they’re demonstrating these skills in athletics, and this is only going to help them in the classroom. It’s going to help them graduate, transfer or succeed in the workplace. Athletics is integral to the mission of this institution, not ancillary to it. This is not a jock thing; this is educational."

Jackson has created a vision, mission and core values statement for the Department, which includes respect, integrity, inclusion, a focus on people (student-athlete welfare), success and commitment. “I want people to be proud of our student-athletes based on what they do in the classroom, on the court and on how they represent the College.”

1-on-1 interviews with Leidy Pena-Guerra

Another area of focus for Jackson is nutrition. “A lot of our students are food-insecure,” she says, and this includes student-athletes. To address the issue, it’s important to Jackson that the students are made aware of the number of resources available through the College’s Single Stop office. A non-perishable food pantry, monthly mobile market and meal voucher program are among the comprehensive social and financial resources available to students. For the 2017–18 season, she worked with Gatorade to create a supplementation program to provide energy and protein products to the athletes during their games, and afterwards to aid in their recovery. “Soccer players, for example, can burn at least 3,000 calories in a day,” she says. “If they are not eating, how can they possibly perform at their best?”

The coaching staff is an essential part of building trust in and safeguarding the stability of the Athletics program at BHCC. Men’s soccer coach Scott Benjamin is a faculty member at the College. Nkrumah Jones, head coach of men’s basketball, and Jen Colburn Logan, head coach of women’s basketball, are proud graduates of BHCC. “I’m feeling very good about our program,” says Jackson. “I want to attract coaches that are proud to be with BHCC, and who really want to mentor our students.”

“
Athletics is integral to the mission of this institution, not ancillary to it. This is not a jock thing; this is educational 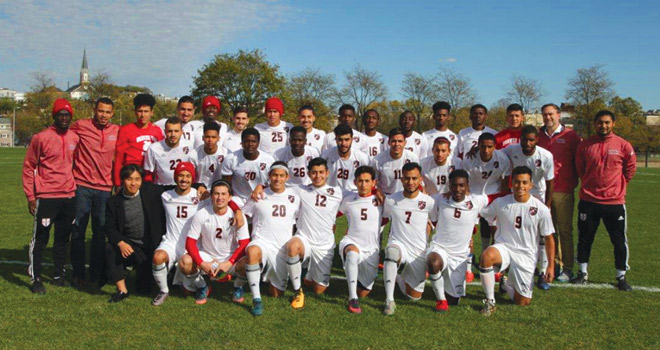 Last fall, the men’s soccer team was the NJCAA Division III Region XXI Champions and State Champions. In December, Coach Jones achieved his 100th win as head coach of BHCC’s men’s basketball team. One of Jackson’s next big challenges will be to increase participation in the College’s women’s sports programs. “It’s an issue across the NJCAA Division III for all women’s sports,” she explains, “but I’m hoping that I’ve put the coaches in a place where now we can really attract more women athletes to BHCC.”

For BHCC students who do not participate in varsity athletics, Jackson and her staff have increased the number of wellness programs available. This year, the department offerings include barre, Zumba, yoga and core conditioning for BHCC students, faculty and staff. There are also times for open gym when students play basketball, badminton and futsal (indoor soccer).

Jackson believes that a successful athletics program is not just about winning. “There’s more than winning—there’s completion, graduation, transferring. So, I think we need to be looking at that,” she says. “If we have a good culture and the aspiration of being competitive, and our coaches keep our students interested, the winning will take care of itself. I want our student-athletes to say, ‘That was a great experience.’ To me, that’s being successful. They could have friendships that last for a lifetime and look back at BHCC as a great experience.”

1-on-1 interviews with BHCC Student-Athletes