A Compelling Conversation with Kareem Abdul-Jabbar

At home in a gym, basketball legend Kareem Abdul-Jabbar was greeted in familiar fashion by a packed house of spectators. Rather than walking onto the court, though, the NBA’s all-time leading scorer and six-time NBA champion took to the stage to address the audience on one of the most socially relevant and politically controversial topics facing our nation today in his talk: “Muslims: Misunderstood, Misrepresented and Maligned in the U.S.”
Previous Next 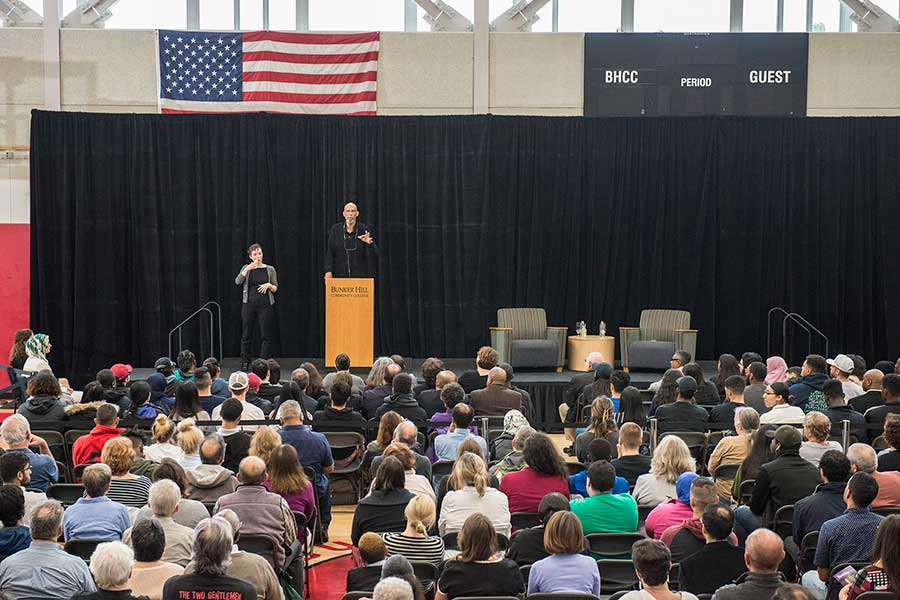 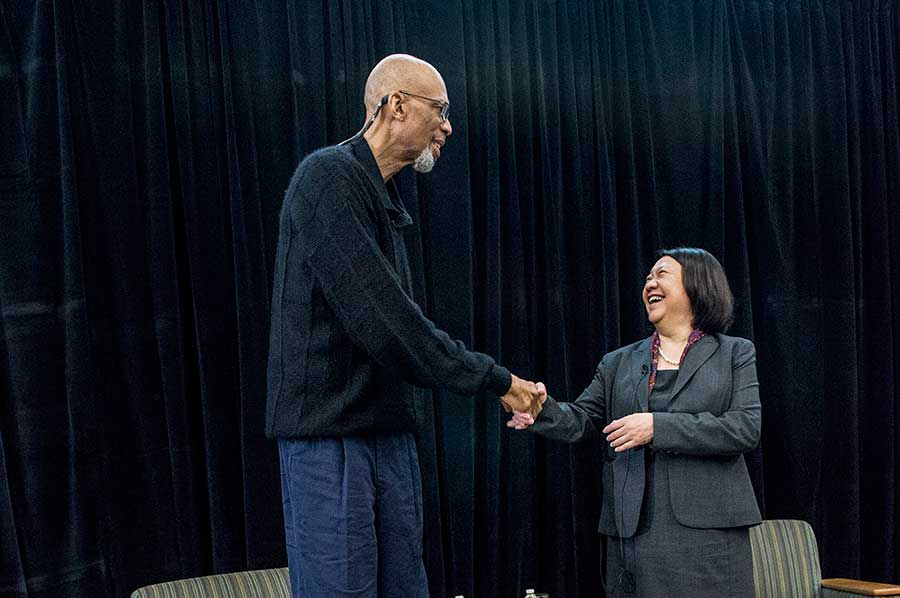 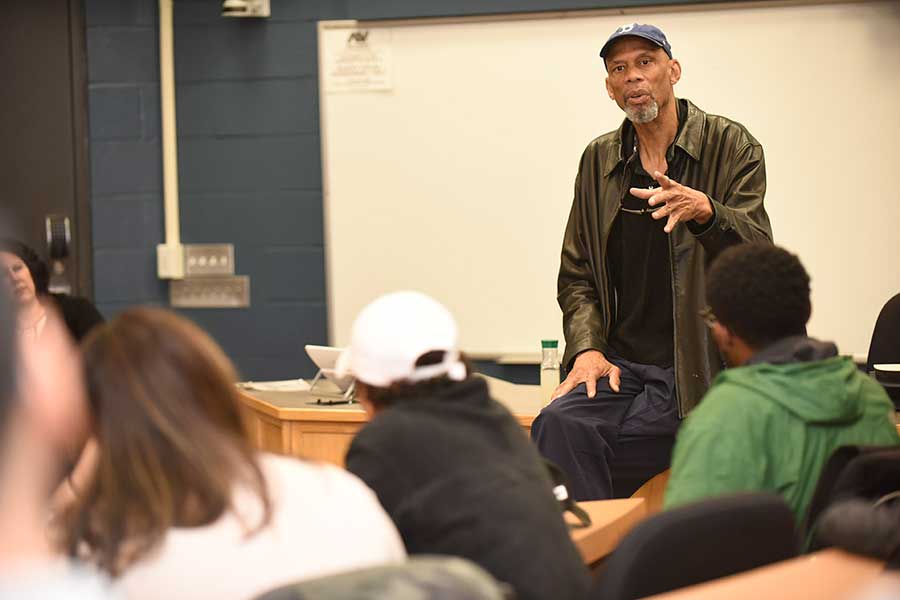 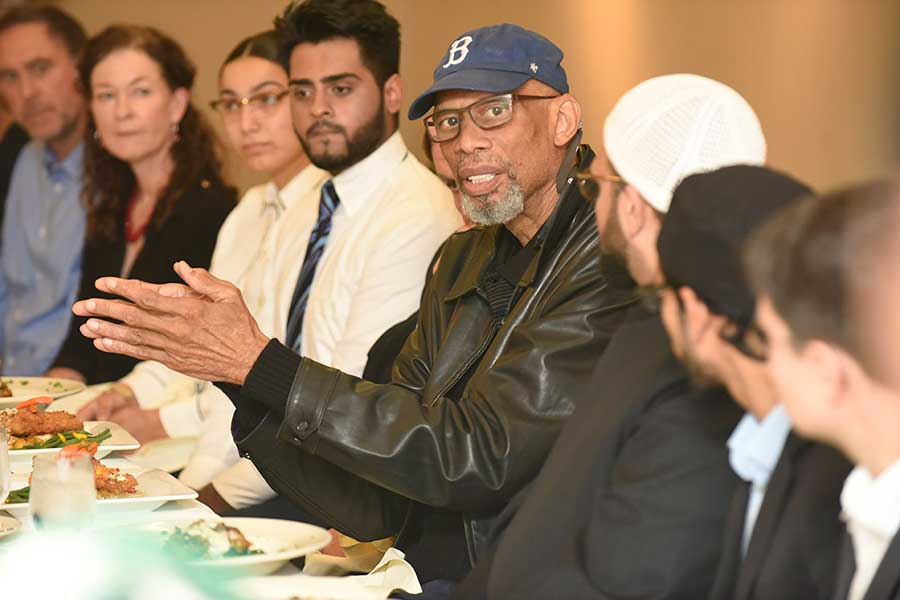 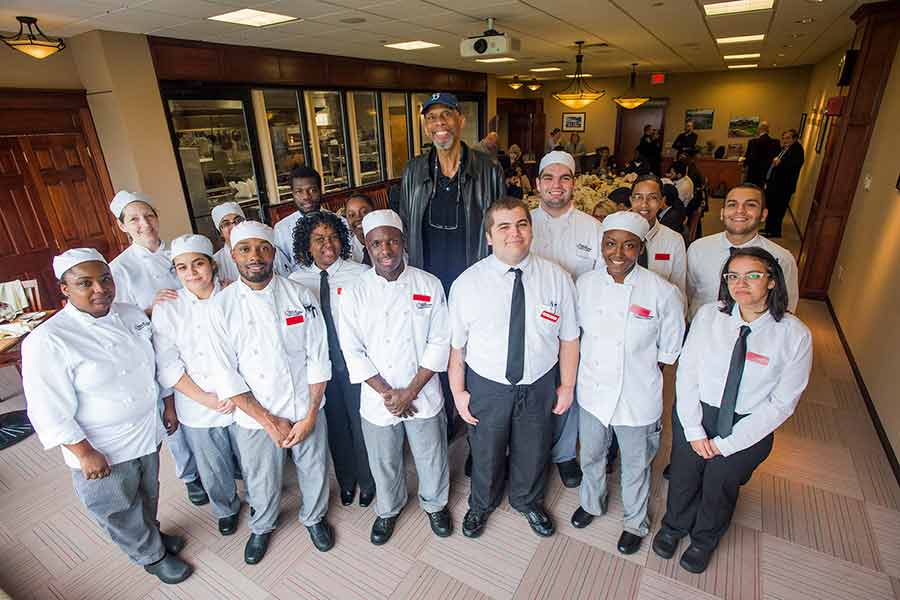 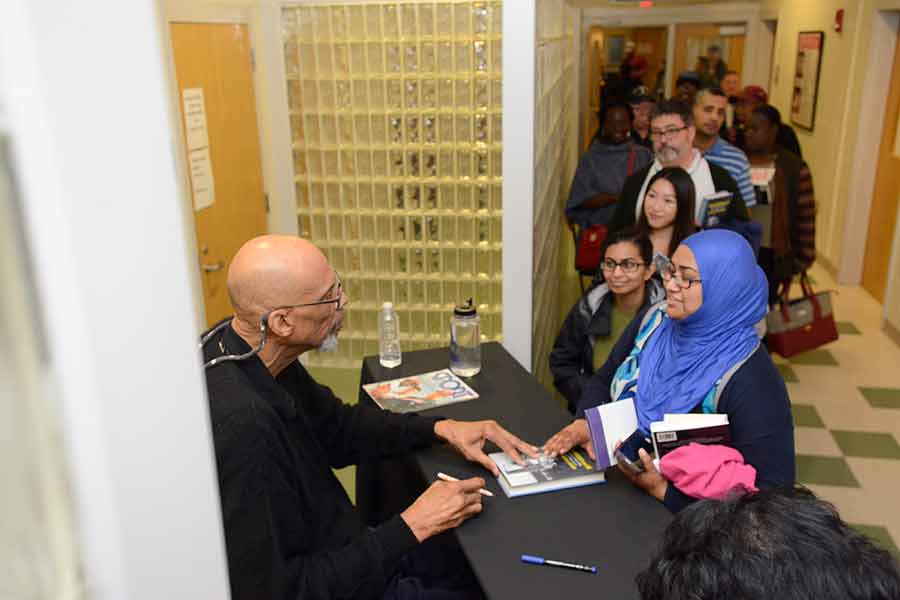 Visiting the College as part of its Compelling Conversations series, Mr. Abdul-Jabbar’s day began with a classroom visit to students from Professor Tony Clark’s African American Literature class and Professor Lloyd Sheldon Johnson’s Learning Communities Seminar entitled “Connecting to Your Inner Orange Line.” He spoke with the students about staying true to their own beliefs, and the importance of education, patience and communication.

The students were ready with hard-hitting questions. One student asked what advice he had for Muslim students who are balancing their involvement in American society against losing their identity. “Understand who you are,” Abdul-Jabbar said. “If you don’t understand your identity, then you risk losing it. Defend your faith because it has given you strength, and let others explain to you what they believe in. It’s important that you take your time. Be willing to listen and ready to explain your side of the issue.”

Another student asked if Abdul-Jabbar would share his thoughts on the recent controversy around the NFL’s Colin Kaepernick and other athletes using their platforms to bring awareness to social issues. “Have you ever experienced anything like that in your life?” the student asked.

“In college at UCLA, I was involved in a protest after Dr. Martin Luther King, Jr., was assassinated,” Mr. Abdul-Jabbar recalled, then described the criticisms from those who questioned why he would engage in such a protest when he had so many positives in his life. “The opportunity to play in the NBA did not change the fact that at that time, I couldn’t vote in the state of Georgia because of the color of my skin,” Abdul-Jabbar said, also expressing his respect for Kaepernick and other athletes for their willingness to stand up for issues that affect many who don’t have the same opportunities as they do.

“Stay focused. Be patient. Explain yourself and the issue—don’t focus on your anger,” he advised.

Shaykh Yasir Fahmy, Senior Imam at the Islamic Society of Boston Cultural Center, was one of the guests at the lunch gathering. He thanked Kareem for being a role model to Muslim youths today, and explained to the group the meaning of Abdul-Jabbar’s Muslim name, which translates roughly to “generous servant of Allah.”

In the gymnasium for the main event, Director of Diversity and Inclusion Tom Saltonstall opened the ceremony to introduce BHCC Athletic Director Dr. Loreto Jackson and Associate Professor Wissal Nouchrif. Dr. Jackson welcomed BHCC students, faculty, staff and community members to the home of BHCC Athletics. “Kareem Abdul-Jabbar is not here to talk primarily about his life as an athlete, but how can we not acknowledge basketball’s Greatest of All Time?” she asked, as the crowd cheered and Abdul-Jabbar gave a modest wave.

Associate Professor Nouchrif, a member of the business department and advisor of the College’s Islamic Student Association, commended the basketball great as a role model to our students. “He teaches them how to use their voice to make a positive change in society,” she said.

Abdul-Jabbar was joined on stage by BHCC President Pam Eddinger for a conversation driven by questions submitted by BHCC students. “Some say we are living in a post-racial society,” she began. “Do you think that is the case?”

“No, I don’t think we’re post-racial,” Abdul-Jabbar answered. “I think we’re at a moment of realizing how racial we are.”

When asked how to combat systemic biases towards minorities in the media, Abdul-Jabbar noted, “Everybody thinks they treat everyone else equally, but that’s not always the case.” He stressed the importance of standing up for others, even for those who do not experience prejudice themselves. “Too many Americans are willing to let things slide if that helps maintain their advantage,” he said.

Wrapping up the program, the conversation turned toward the work that Abdul-Jabbar does for at-risk youths through his Skyhook Foundation. “We need better educational opportunities in poor communities,” he stated. Looking out at the gymnasium of students from diverse backgrounds, he acknowledged that many in the audience had likely made sacrifices in order to pursue a college degree and a brighter future. “I am thrilled to see this wonderful rainbow of humanity here. People at this college are seeking opportunities for themselves, and that will make America even better.”

Learn more about our speakers at bhcc.edu/speakers

In the presence of greatness, and even better, kindness. It was a pleasure, @kaj33.

Not only did he do the speaking gig; but took time to talk to students in the classroom and at a student issue-focused lunch. Great visit! https://t.co/8xnZM5OVAr