In addition to his work in professional sports, Davis consults for Google, Netflix, MTV/VH1, 21st Century Fox and AppNexus to create inclusive corporate cultures. He is also an active contributor on numerous educational and media projects to engage men on issues of gender equity and equality and ensure women’s workplace equality. 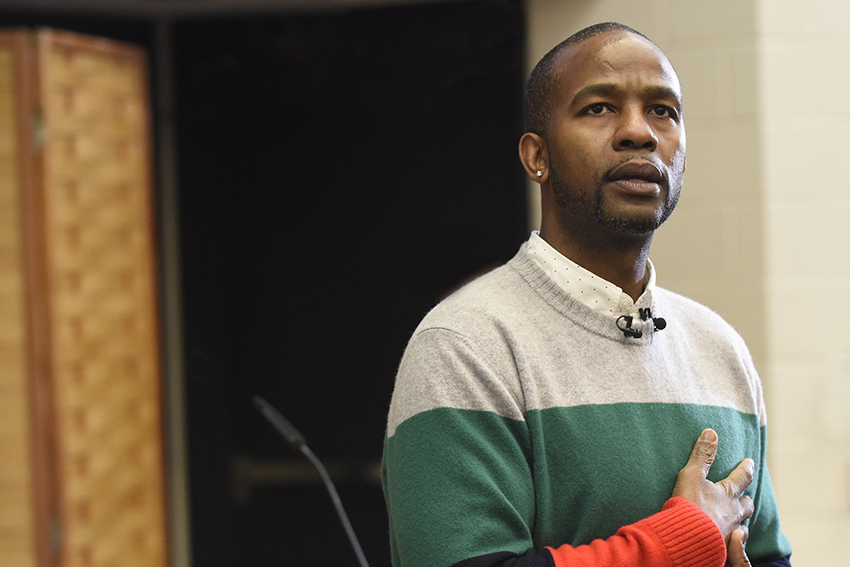 At the event, Davis discussed how Martin Luther King’s “I Have a Dream” speech represents modern-day intersectionality. “History is not just meant to give us facts,” said Davis. “It allows us to find and understand truth.”

He urged the BHCC community to ask questions to try to understand those around them at the various intersections of sexism and racism. “That is what Martin Luther King’s speech was about at the core,” he said. “It was about how we close the distance between each other so that we can see ourselves in one another, and so that we can finally love one another.”

Jacqueline R. McMillon-Williams, Director of Advising and LifeMap and BHCC alumna, delivered the opening remarks to Thursday’s presentation. “I am what a community college graduate looks like, in fact, I am what a Bunker Hill Community College graduate looks like,” she said, “And I am standing here today to thank you for taking part in BHCC’s tradition of ensuring that diverse perspectives are heard and affirmed on campus.”

In partnership with BHCC’s newly launched Center for Equity and Cultural Wealth, the series of speakers for 2018-2019 is intended to support meaningful and relevant discussion both inside and outside the classroom as part of the College’s ongoing exploration of power, privilege, equity and cultural wealth which served as the focus of the College’s first Equity and Cultural Wealth Institute in May 2018.

Lee Santos Silva, Professor and Chair, English Department, introduced Davis to the BHCC community. “We know who we are and we know what we value,” he said, “And chief among our values is respect for each other and respect for ourselves. It’s an honor to be part of a community that holds these values, but it’s even more exciting to be part of the work that breathes flesh, blood and movement into these values so that we can live them out in our work and in our lives.”

For more than ten years, BHCC has hosted nationally-recognized thought leaders and speakers to share their experiences and opinions in onstage conversations, literary readings and compelling lectures that both expand and challenge the BHCC community’s awareness of contemporary issues. For a complete list of speakers, past, present and future, please visitbhcc.edu/cc.