“Being in the studio” 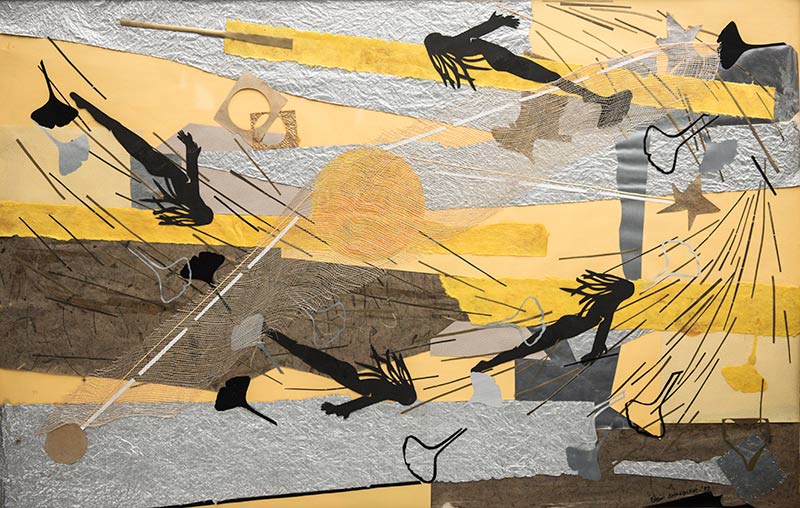 As an artist, crossing media boundaries as well as transnational boundaries is rooted in my own mixed heritage. It motivates my passion for visual documentation through autobiography and “visual memoir,” and it has kept me moving across nations when “I am in the field”. Artists everywhere are the same; they are our eyes and ears, fingers and feet, heart and soul and they have been making things everywhere for thousands of years. To be “in the studio” as I have experienced it is to be in a dynamic, altered state of consciousness moving through the drudgery of making something worthwhile, constantly editing a film running through the mind. Since the late 1980’s, my work has focused on social and spiritual commentary, themes of peace, freedom, transcultural heritage, women’s struggles, science imagery not originally produced by software, and using art to inspire, stimulate and promote thinking concerning unity and peace-building from the local to the global level.

“Your imagination comes to life, and this, you think, is where Creation was begun.”

For the last decade, I have experimented with multimedia applications and digital technology to explore studio production and 2- and 3-D projects. As a collage artist, I use my own sketches; hand-cut drawings, photographs, digitized images, and handmade papers to construct traditional and digital collage works, some large scale. My technique, “drawing with scissors,” uses scissors to cut preliminary sketches freehand, rather than with pencil. I often produce series (7 or 9 works in each), such as The Seven Valleys, a meditation on spiritual journeying produced in France at La Muse Artist residency in 2009, the Peace Series, a set of nine collages that demonstrated humanity’s evolution in the stages of peace and war, and the Stone Tablets series (2014) that reflects on the sacred tablets from the four corners. The reconstruction of original handmade works and digitally generated images allows for a discovery of new means for expressing color, form, texture, and media and to explore socially relevant ideas. Similar to my work as a social scientist at the art crossroads, the art of handmade paper and the science of digitization blend into new forms and new ways of thinking about production issues. For example, Rapid Response (UMass Amherst, 2001), a group exhibition of artists addressing post 9/11 trauma, combines handmade images digitized with a poem “Instructions for the Year 2001: Remember the Way Home” superimposed over the image.

In 2010, my work Capoeira became the book cover of Women, War, and Violence: Personal Perspectives and Global Activism (Palgrave Macmillan), a book that focused on gender-based violence globally including my own work in Liberia. In addressing issues of identity, my poem “Siouxjewgermanscotblack (Cherokee)” has been published in Other Tongues: Mixed Race Women Speak Out (Inanna Publications, Inc., 2010). My major community-based work The Peace Doors Project is designed to build and erect nine monumental “peace doors” in nine countries, a process of peace-building originally “workshopped” in South Africa, Australia, and currently in the United States.