Filmmaker and author Baptist de Pape visited Bunker Hill Community College (BHCC) on November 5 for a screening of his film The Power of the Heart, which ties to a book of the same name. Featuring interviews with Paulo Coelho, Maya Angelou, Deepak Chopra, Isabel Allende, Eckhart Tolle and other spiritual leaders, the film makes a case for the transformative power of the human heart. 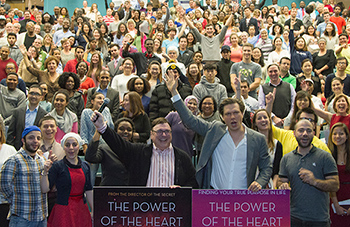 De Pape told the audience that the film emerged from a personal crisis about his life’s purpose following his graduation from law school and a lucrative offer from a prestigious law firm. He described his reluctance to accept the offer and his belief that his heart urged him to take a different path. With no training as a filmmaker or author, De Pape determined to seek out the leading spiritual leaders of the present time and record on film their views of the heart’s power to guide and shape an individual’s destiny.

Through interviews, personal stories and scientific studies, the film explores De Pape’s conviction that the heart is more than a physical organ, and that it possesses an intelligence that can activate special powers of intuition, intention, gratitude, forgiveness and love.

“Bringing this very special film to the College, and sharing it with an audience of more than 400 people was one of the most important and inspiring experiences of my career here at BHCC,”   said Coordinator of Student Activities Paul Moda. Moda serves as advisor to the College’s honor society Alpha Kappa Mu, which sponsored the event along with the Office of Student Activities. “Too often, we get lost in the noise of our minds,” Moda added, “but Baptist and his film demonstrate that when you listen to your heart, your life opens up. If more people learned to live from their heart, we would live in a very different world, and that is a world that I dream of.”

After the screening, De Pape shared his experience of making The Power of the Heart, took questions from the audience, and signed copies of his book. To view the movie trailer, go to  http://www.thepowerofthe heart.com/en/movie.

“We were so happy to meet Baptist,” said Glen Arruda and Sondos Alnamos, Co-Presidents of Alpha Kappa Mu. “Not only is he a fantastic author, he is a fantastic teacher.  He taught us that we are alive, and that we each have a purpose in this life that we need to look for.  And, most important, when the heart opens, the mind expands.”