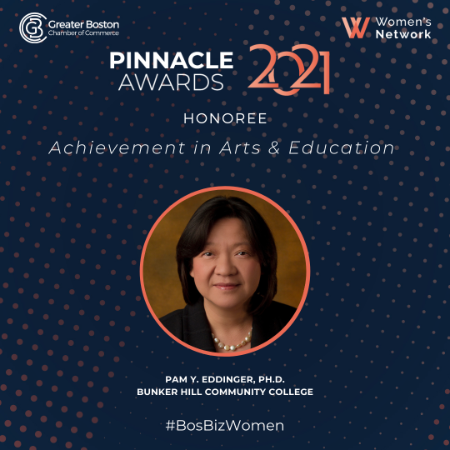 “Our Pinnacle Awards are always extraordinary, and this year, the celebration acknowledges the tremendous leadership of the honorees as they led their companies and industries through a time of crisis,” said James E. Rooney, President & CEO of the GBCC. “As we begin the 27th year of the Chamber’s Women’s Network, it is even more important that we amplify the voices and accomplishments of women in the business community as they lead us forward.”

President Eddinger shared her story of migrating to the United States with her parents, who wanted a better education for their children. She credits her parents for her leadership in the community college movement so the next generation of immigrants will have choices, will have language, and will see a broader horizon. “I do my work so every immigrant and native child will have access to affordable, higher education and be touched by the grace and power of the arts,” said Dr. Eddinger.

Dr. Eddinger says to women entering the workforce “attempt whatever task when you think you are 75 percent ready. Then find a mentor to help you learn the other 25 percent.”

"Thank you to the Chamber CEO Jim Rooney, and Chair Micho Spring, for providing a platform to lift up the contributions of women to the Boston economy, and to encourage our next generation leaders to reach up and speak up. I also thank my students, faculty, and staff at Bunker Hill Community College, to allow me to lead, and to do meaningful work," said President Eddinger.