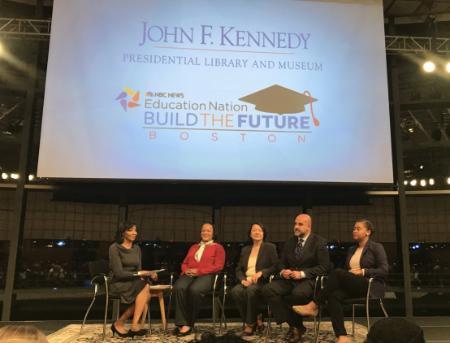 The NBC NEWS Education Nation Boston: Build the Future event brought together students, educators and community leaders at the John F. Kennedy Presidential Library and Museum for a series of panels exploring topics from college access and equity to skills all young adults need now and for the future.

With 70 percent of Boston Public Schools students coming from economically disadvantaged backgrounds, ensuring that they are prepared for, and have access to, a quality postsecondary education is central to the College’s mission.

At Wednesday’s forum, President Eddinger spoke to college access, retention and completion in “To & Through,” a panel focused on efforts underway that give students the tools necessary to make a college education a reality.

Watch the Build the Future webcast.