During a daylong visit to Bunker Hill Community College that included a classroom visit, a luncheon with students and faculty members and an address in the College gymnasium, Sybrina Fulton told students, “Protect your life. It is a valuable gem.” Fulton is the mother of Trayvon Martin, the 17-year-old high school student killed in a violent confrontation in 2012 in Sanford, Florida. 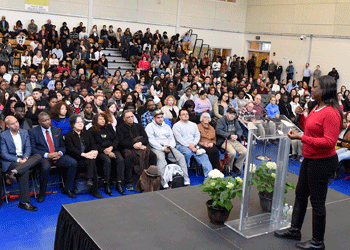 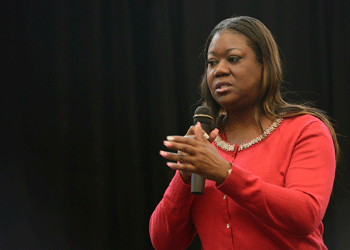 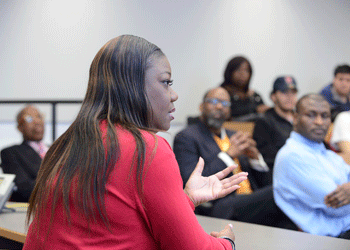 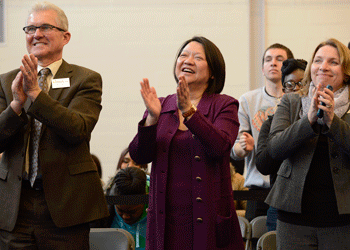 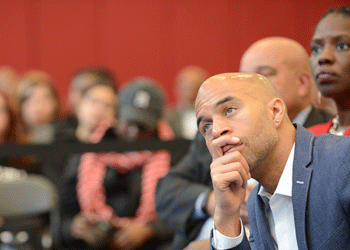 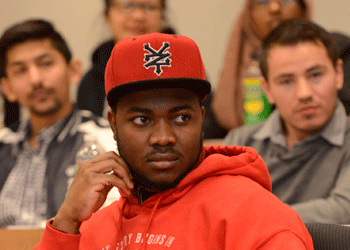 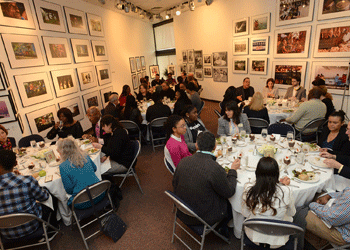 The death of Martin provoked a “national soul searching,” said BHCC President Pam Eddinger in introducing Fulton. She described Fulton and her son as “reluctant heroes” in a deeply necessary national conversation.

Fulton described herself as “an average mom,” and her son Trayvon as an “average kid” who liked “expensive sneakers and loud music and would eat all the cereal in the house.” She spoke to the gathering of more than 700 students, faculty, staff and guests without notes, saying her message was “off the top of her head and from the bottom of her heart.” The enthusiastic audience clapped throughout her talk and gave the speaker two standing ovations.

In the aftermath of her son’s death, Fulton said, “I thought I’d never be happy again.” She said she has found comfort in speaking out for parents and concerned citizens across the country and has created the Trayvon Martin Foundation to support her work and reach out to others who have lost loved ones. The social justice organization is committed to ending senseless gun violence, strengthening families through holistic support, promoting education for women and minorities, and mentoring.

During her day at the College, Fulton met with students in a Learning Community Cluster that brings together Professor Lloyd Sheldon Johnson’s seminar for urban males called Connecting to Your Inner Orange Line and Professor Jac-Lynn Stark’s accelerated English course called Lyrics, Images and Words.

Fulton told the students of her recent visit to a mosque to learn about Muslim religious practices. “Respect others’ differences,” she urged, “whether it’s the color of their skin, their social status and level of education or their sexual orientation.” She advised connecting with non-profits that promote self-worth and education, and finished by telling students to “mentor somebody.”

A Miami native, Fulton earned a bachelor's degree in English from Florida Memorial University. She worked for the Miami-Dade County Housing Development Agency for more than 25 years, and is a member of Antioch Missionary Baptist Church of Miami Gardens.