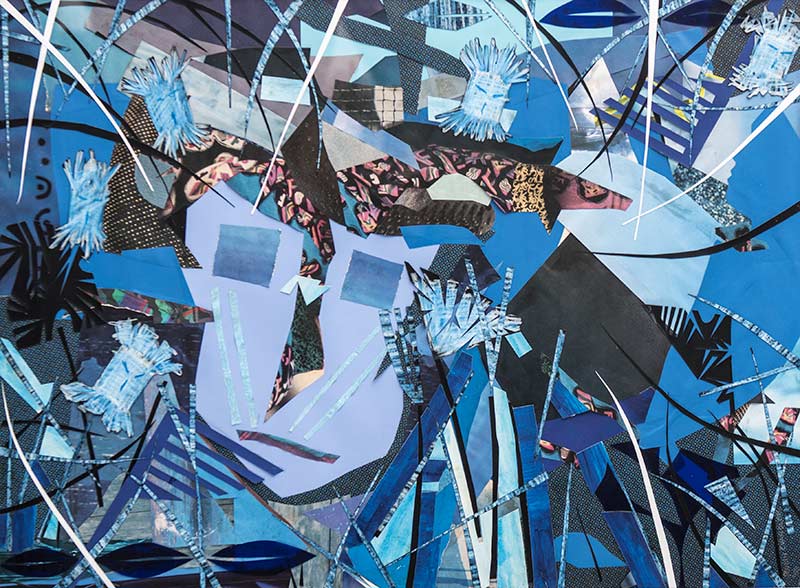 I needed a revolutionary way to describe my technical approach to collage production. “Drawing with scissors” is the counterpoint to using a pencil to draw and it has taken a long time to be able to cut materials precisely. Paper–cutting is an ancient craft. In China, paper-cutting (Jianzhi) is a 1,500 year old tradition recognized by UNESCO’s Intangible Cultural Heritage list. The craft traveled to Japan (kirigami or even kamikiri, performance paper-cutting in Edo), and is practiced in Jewish custom, Mexico (papel picado), and Slavic countries. Paper–cutting has many names and is part of traditional celebrations in many parts of the world.  Since I work in mixed media and with varying types of paper, films, and photographs, I referenced my high school chemistry and experimented using test boards to observe how different types of adhesives interacted with varying paper surfaces over time and environmental conditions. All of this takes time. But beyond the making of paper (homemade or commercial), pulp painting, digitization, and traditional collage methods are part of my production process.

"Collage is drawing with scissors."

Handmade paper is a beautiful tradition that dates back thousands of years. Globally, the concept and manufacture of paper evolved. Papyrus (pressed and dried plants—organic material) in Egypt and the Mediterranean might be the original placeholder for a surface that could withstand writing, but its durability suffered. In the pre-Columbia Americas, amate (bark paper) was developed. In Europe, vellum followed. True paper was first documented by the Chinese during the Eastern Han dynasty (B.C. 202 - A.D. 220) and was made of mulberry, hemp waste and other fibers replacing the awkward and cumbersome bamboo and bone surfaces that had been current; the invention has been attributed to the Chinese court official Cai Lun (c. 50-121). In 1993, I received a grant from the National Endowment for the Arts at Pyramid Atlantic Printmaking and Papermaking Studio in Maryland. I created my own friskets (stencils) of forms I use in my work - the flying priestess, gingko leaves, dance forms et al. I learned to make paper using pulp painting as a method with the extraordinary staff at Pyramid Atlantic. Many of my works are made with the paper I produced including the Coltrane  Memorial I, Taking Away the Medicine, Freedom and Madness, Jibarito, Sacred Bundles, Tell the Rich of the Midnight Sighing of the Poor, and The End of Everything.

" Go within every day and find the inner strength so that the world will not blow your candle out."

Once the internet and digital technologies emerged,  the science of “-photoshopping-” (Adobe Photoshop and its iterations) revolutionized my aesthetic capacity: thousands of 35 mm slides could then be scanned, color edited, and manipulated in my expanding archive. The first night I discovered the slide-scanning feature (planning to scan only 10 slides) it got away from me. My family had to call me home for dinner. And the first time I photoshopped a self-portrait, I totally lost it and continued with other works until I surpassed 100 new still images, digital storytelling, and videos. Regarding new technologies, I am just getting started.

But I go back to the dedicated and energetic staff of Pyramid Atlantic for my appreciation of paper-making and the more transformative skill for me–pulp painting. The friskets I cut in advance meant I could pulp paint by embedding the friskets into the paper and apply the pulp paint before it dried on many 30” x 40” sheets rather quickly. The synthesis of substrate, pulp/paint medium, and image is an unconventional strategy enabling the images and forms to be worked in the paper, not merely on it. I purchased this black acrylic travel case—my BFF—to transport my tools. The next year, 1994, I took this case to South Africa for an art residency at the Fordsburg Bag Factory and it has accompanied me on all of my residencies beyond the United States and through some perilous customs exchanges.