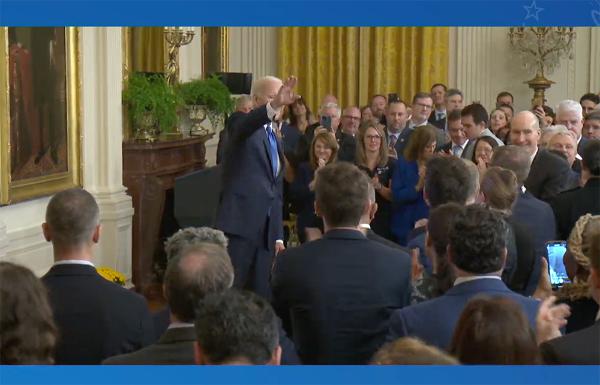 In July, First Lady Dr. Jill Biden, along with Secretary of Labor Walsh, U.S. Representative Ayanna Pressley, and U.S. Senator Ed Markey, visited a South Boston Eversource facility where BHCC students are part of the Electric Power Utility Technology (EPUT) program. First launched in 2004 in partnership with UWUA Local 369 and BHCC, the Electric Power Utility Technology (EPUT) partnership was designed to build a diverse pipeline of technical talent for critical positions in electric operations, and later incorporated a gas certificate in a partnership with USW Local 12004. The competitive program receives more than 200 applications each year for only 18 spots, and selected students receive classroom education and real-world training in the field with Eversource crews. Additionally, Eversource provides partial tuition funding for students through paid internships and a stipend.

“It is always an honor to be invited to the White House and for the College to be publicly praised by the President of the United States,” said BHCC President Pam Eddinger. “It is a testament to the hard work of the educators at Bunker Hill Community College, the commitment of and to our students, and the strength of the partnerships we have forged with businesses, unions, and government to build a more inclusive workforce in our region.”

At Wednesday’s event, the White House recognized the commitments made by more than 350 organizations in 50 states and territories as part of the Infrastructure Talent Pipeline Challenge. The Challenge, launched by the Biden-Harris Administration in June, is a nationwide call to action for employers, unions, education and training providers, states, local governments, Tribes, territories, philanthropic organizations, and other stakeholders to make tangible commitments that support equitable workforce development focused on three critical sectors: broadband, construction, and electrification.

The Bipartisan Infrastructure Law—along with the CHIPS and Science Act, Inflation Reduction Act, and American Rescue Plan—are creating millions of good-paying union jobs, and the Challenge aimed to ensure that workers across the country are trained for these jobs. The private, public, and non-profit sector commitments complement the Administration’s investments in workforce development and help ensure a diverse set of workers have a fair shot at the good jobs created.

Read more about the Infrastructure Talent Pipeline Challenge on Whitehouse.gov. You can watch a recording of the livestream of President Biden’s remarks on YouTube.

Terrific to be at the @WhiteHouse for the Infrastructure Pipeline Initiative. Jim Rooney @bostonchamber and @PamEddinger @BHCCBoston, proud to be the Mass contingent. pic.twitter.com/KAr15sMmXY