Earlier this month, Bunker Hill Community College’s DISH Food Pantry took a major step towards improving access to food and other daily necessities to the college community. In an otherwise nondescript hallway in B-Building, outside the DISH’s main food pantry, a bank of lockers, brightly colored in red and gray and adorned with the stolid visage of Charlie the Bulldog, stand ready to serve meals and much more—the first such lockers to be used by a college food pantry in the country. 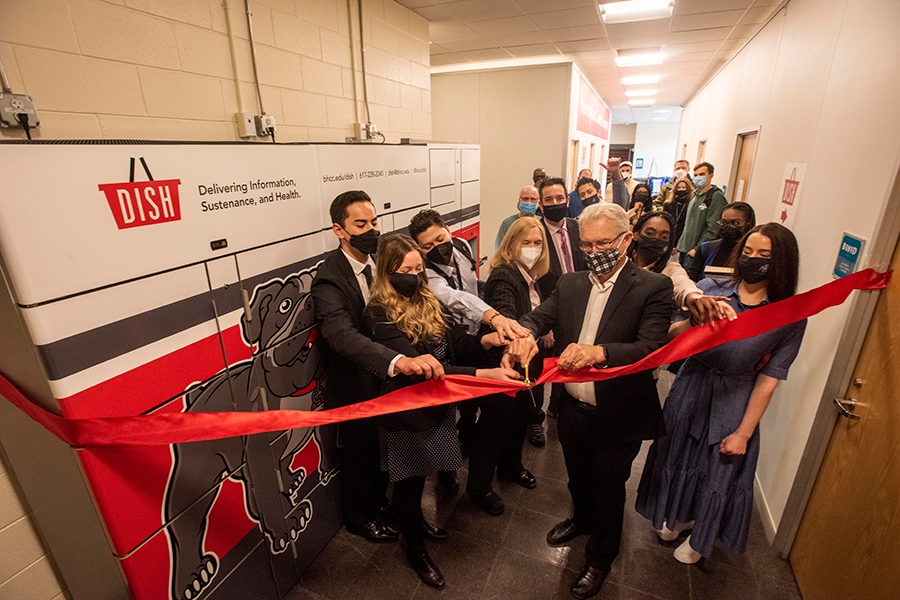 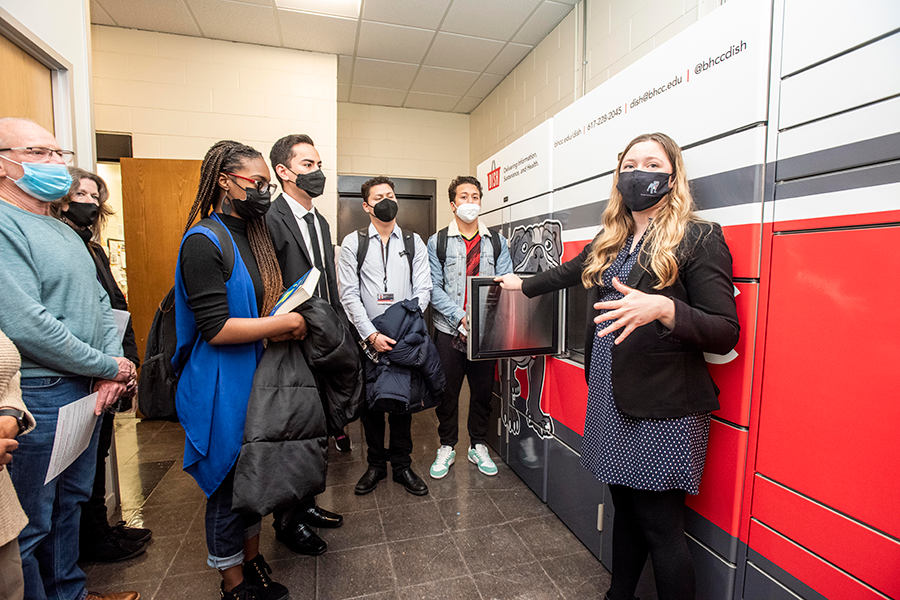 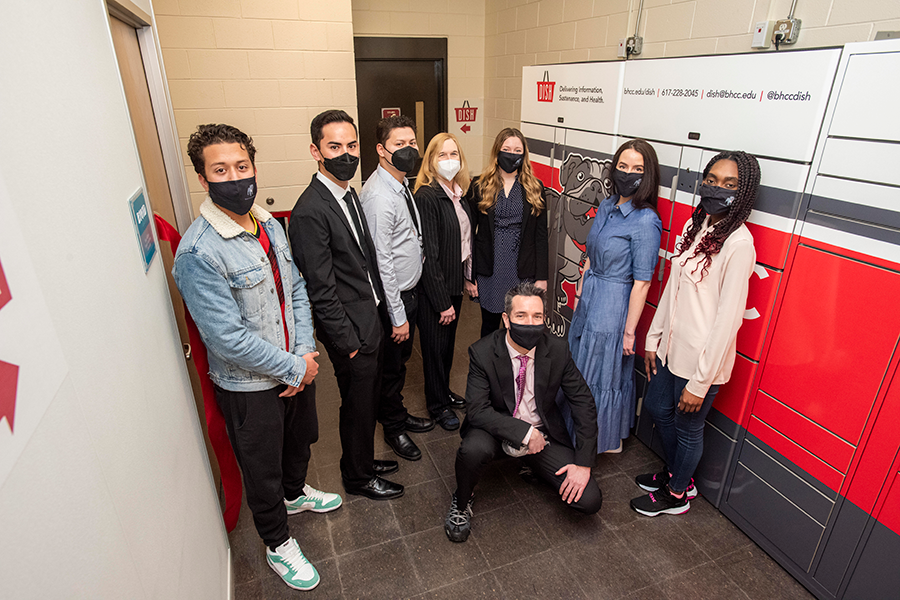 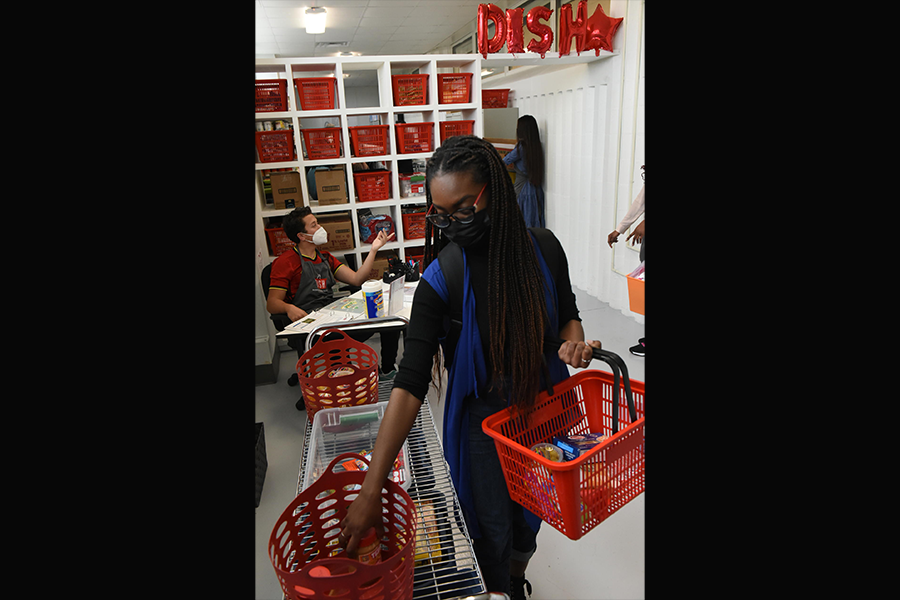 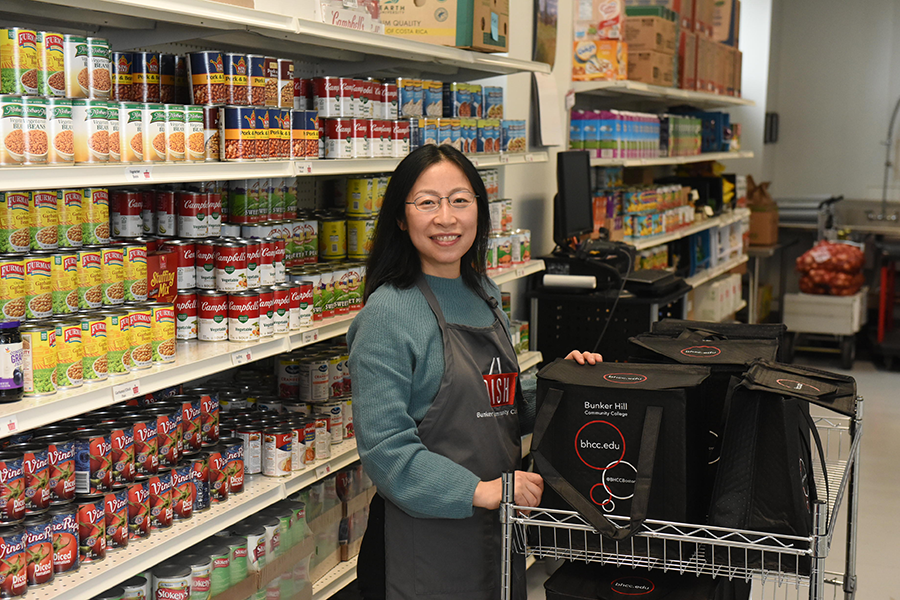 The new lockers, which are refrigerated and automated in the manner of many Amazon lockers and have been named the DISH & Dash Lockers, are part of an effort that began even before the pandemic to provide nearly frictionless access for users of the DISH to food and household items. Users can order food online through the DISH’s SmartChoice system, and staff will stock items in the lockers. When the student wishes to pick up their items, they enter a code on the locker keypad and a door to the compartment containing their order opens automatically.

Food and supplies offered by the DISH comes from many individuals, organizations and non-profits, including the Greater Boston Food Bank, Food for Free, Food Link, Stop & Shop, and Hope & Comfort.

DISH Coordinator Molly Hansen, along with Vice President of Administration and Finance John K. Pitcher, Dean of Students Julie Elkins, Assistant Dean of Students Will Cribby, along with Student Government officers and DISH supporters officially opened the lockers with a ribbon cutting ceremony on campus— the culmination of months of work to make the lockers a reality.

“When the DISH committee first formed, the main idea was to increase access and have it be dignified, and so we started out with our online SmartChoice system—users don’t have to stand in line, they don’t have to set foot in the pantry anymore, they can have it ordered online and delivered to them,” says Hansen. “Then, we were running into this problem of students who could only come at 7 p.m. or on Saturday and I started thinking of ways we could have students come in and pick up without having the staff here.”

When the DISH, through the efforts of Hansen, along with Elkins, Cribby and Pitcher, received funding through the Commonwealth’s Higher Education Emergency Relief Fund in November 2021, they began the process of procuring the lockers from Quadient, a company that works with colleges throughout the country providing storage solutions—but, for the first time in a food pantry.

While the lockers will provide expanded access, the DISH’s grab and go area remains a popular way for users to pick up food and household supplies, and as a community-building venue, where users can browse all that the DISH has to offer, and connect with each other and with DISH staff. The lockers also complement the DISH’s delivery service, a mainstay of the pantry during the pandemic, which brings food and supplies to users homes on a monthly basis.

For Student Government Association President Chase Baker, April’s locker opening represented another tool for the BHCC students he represents, and for himself. “It’s the basics, it’s essential, it’s a lifeline for students,” says Baker. “I’ve been using the DISH for a while and I receive it on a monthly basis, and it’s been helpful—honestly, if I look at the numbers, I spend $400 on food in a month, and when I order here, I get $150 of food…it helps the bottom line. That’s been President Eddinger’s mission, supporting the bottom line for students, and this gives us the fighting chance to become successful and have a clear mind to work.”

At BHCC, addressing the issue of food insecurity in the college community has been a priority for the last decade. The College estimates that around 55% of students experience food insecurity, which means that over a 30-day period, those students don’t have enough to eat, or must choose between paying for things like rent or transportation and buying food.

Over the course of her tenure, BHCC President Pam Eddinger has made addressing those needs a top priority, leading the establishment of the DISH, and she and the College have been recognized for raising awareness and taking action on this important and often overlooked issue.

“My end goal in addressing food insecurity on campus is to get students to stay at college, and graduate,” says Eddinger. “Once a student leaves BHCC, the odds of them returning are very low. As a result of food insecurity, many students forfeit their ability to earn a higher wage in the future, and their likelihood of breaking the cycle of poverty without a college degree.”

Members of the BHCC community can learn more about the DISH and the new lockers, including how to sign up to use them and how to donate, at bhcc.edu/dishfoodpantry

Our lil pantry just became the first college in the country to have refrigerated lockers specifically for food pantry pick-ups dignity, flexibility, & privacy for our users—we love to see it! @bhccdish @BunkerHillDoS pic.twitter.com/xWXzqJCn19

What a way to start Community College Month at @BHCCBoston! The refrigerated DISH & Dash lockers are officially up and running! Big thank you to @mollyjhansen at the @bhccdish, Charlie the Bulldog & all who supported this initiative. Orders can be placed via @SmartChoiceFPS! pic.twitter.com/YxQnVTrdQK