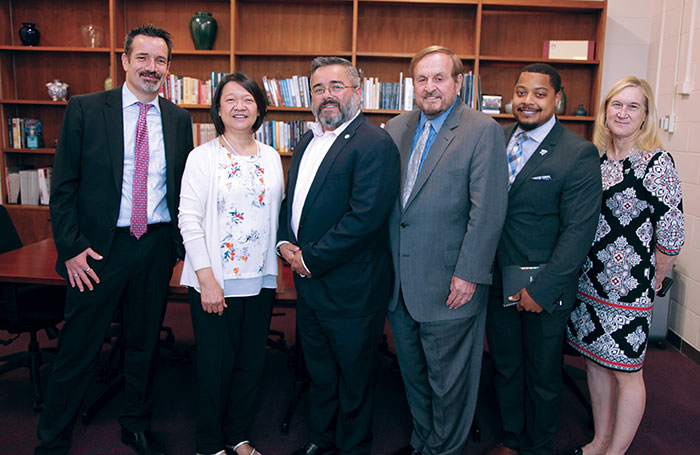 Santiago was appointed to the position of Commissioner of Veterans’ Services in April. He is the first Puerto Rican and LGBTQ Veterans' Commissioner in the City's history. Before joining the Mayor's Office of Veterans' Services, Santiago served 20 years in the Navy in diverse duty stations including sea duty on four warships, and overseas tours in Belgium, Puerto Rico, Panama and Japan. Santiago participated in Desert Shield/Desert Storm, Eastern Exit, Enduring Freedom and Iraqi Freedom. His final duty station was in Boston onboard America's Ship of State, the USS Constitution, which is the oldest commissioned warship afloat in the world. He retired from military service in 2008 while onboard USS Constitution. Santiago also attended BHCC in 2008.

Misael Carrasquillo, Special Programs Coordinator for BHCC’s Veterans Center, welcomed Santiago to the campus. Santiago toured the facility and met with BHCC students who use the services of the Veterans Center. Carrasquillo also gave a presentation of the Veterans Center that included testimonials of BHCC alumni who are veterans and had a successful experience at BHCC, graduated and transferred to a four-year university. At the end of the visit, Santiago gave the students challenge coins and ensured that he will be of any support that they need.

Santiago is on the Executive Board of the Massachusetts Veterans Services Officer Association and is a life member of the Veterans of Foreign Wars and the American Legion. Santiago is also a member of the leadership team for the Homes for the Brave initiative which is part of the Mayors Challenge to end Veteran Homelessness.

Each semester, nearly 400 veterans enroll in classes at BHCC. In 2017 and 2018, BHCC earned the Military Friendly® School designation by Victory Media, publisher of G.I. ® Jobs, STEM JobsSM and Military Spouse. The BHCC Veterans Center will hold information sessions for any veteran, active duty service members, Guard/Reservists and their dependents who are interested in attending Bunker Hill Community College. Visit bhcc.edu/veterans to learn more about the BHCC Veterans Center.