For the first time in Bunker Hill Community College history, the Bulldogs, the College’s men’s basketball team, have made the National Junior College Athletic Association (NJCAA) National Top Ten. The Bulldogs are ranked 8th in Division III. “We have a deep bench of skilled, athletic and happy players who work hard every game. That combination makes us difficult to beat,” said men’s basketball Head Coach Nkrumah Jones, ’01. 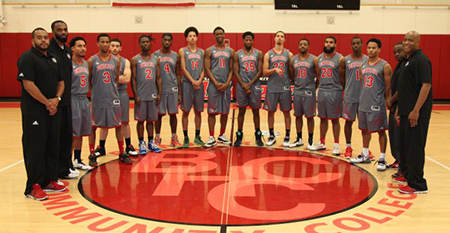 The Bulldogs launched their season November 3 with an unprecedented 13-4 record, beating the Community College of Rhode Island team, the CCRI Knights, 87-69. When the Bulldogs arrived home they won eight games. For more information about the Bulldogs, visit bhcc.edu/athletics/mensbasketball.