Award-winning journalist, documentary filmmaker and best-selling author Sebastian Junger, who saw combat while embedded with U.S. soldiers in Afghanistan, visited Bunker Hill Community College on November 12 in honor of Veterans Day. Junger shared his experiences as a war reporter and filmmaker. He has covered major international news stories for Vanity Fair and ABC News and directed the documentaries Restrepo and Korengal, based on his experiences in Afghanistan. 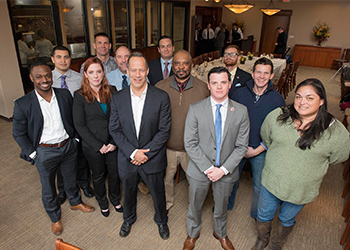 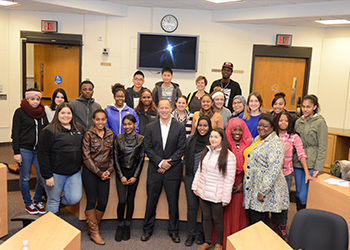 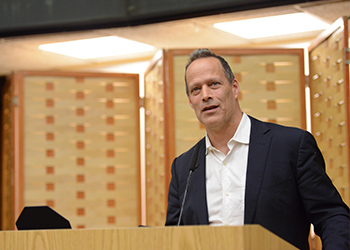 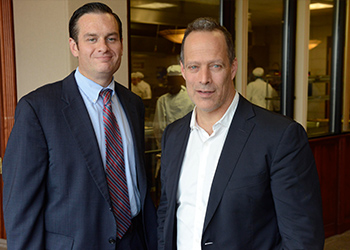 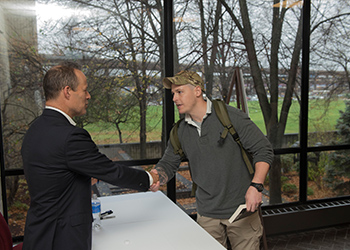 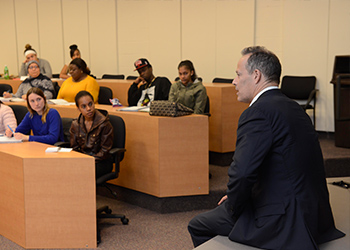 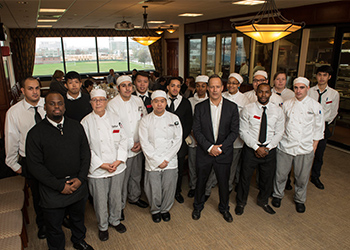 “We need great storytellers like Sebastian Junger to tell our stories,” said BHCC Student Veterans Organization President John Doyle, who introduced the author of WAR, The Perfect Storm, A Death in Belmont and Fire.

In addition to his auditorium lecture, Junger visited writing and video production classes and enjoyed a luncheon with students prepared by Culinary Arts majors. He also stopped in at the College’s Veterans Center, which provides assistance and support for the College’s approximately 450 military veterans. For more information on BHCC’s Veterans Center, visit bhcc.mass.edu/veterans.
Junger, who grew up in Belmont, Massachusetts, told the audience about finding his calling after a string of jobs that included waiting tables in Harvard Square and trimming trees. He decided to pursue journalism seriously when sidelined by a chainsaw injury at age 30. “If you are excited about what you’re doing, you’ll get good grades,” Junger told the students.

He described writing his best-selling book, The Perfect Storm, between war-reporting journeys to Bosnia and Afghanistan and talked about his forthcoming book Tribe, which portrays the difficulties returning U.S. service members face, including PTSD.

Marc Silvestri, a North Shore Community College student veteran who served in Afghanistan, brought his daughter with him to the talk. “I used Restrepo to prepare for service in Afghanistan,” he told Junger during the question and answer period. “Thank you.”