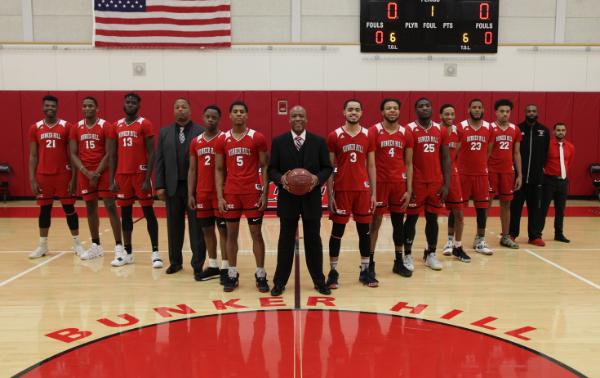 The imposing end to 2018-2019 Region play highlighted a season of noteworthy accomplishments by the team, individual players and coaches. The BHCC men’s team was ranked as one of the top ten programs in all but the first week of the national poll. This winningest BHCC team has won 27 games thus far with a 15-0 win record at home and a 16-game winning streak during the season. These wins included a win over No. 2 ranked Nassau Community College (Garden City, New York) to start the year, as well as those over two higher ranked teams to win the Region XXI tournament. The team is first in the country in rebounds (55.9/game) and number two nationally in steals and assists.

Team captain Jamaurie Coakley (sophomore) was nominated JUCO All-American and Player of the Year for Region XXI. Coakley led the Region in steals and passed the 1,000 points scored mark (the first in 14 years of BHCC basketball). Dayne Allen (sophomore) led the region in rebounding (11.4/game) and is second in the Region in blocks (2.9/game), ranking him as 5th in the country in both rebounds and blocks per game. Captain Janard Jones (sophomore) is currently the winningest player in BHCC history with 48 wins, while also leading the team in 3-point shots made (65).

The BHCC Men’s Basketball Team excels not only on the court, but also in the classroom. Characteristic of the principle of the “student-athlete,” this team started the spring semester with a GPA of 2.96 with six student-athletes maintaining an overall GPA of over 3.0: Dayne Allen, Laqu Howard, Janard Jones, Quincy Taylor, Craig Thomson and Marvin Urdaneta.

While the student-athletes execute the plays that determine the outcome of the games, the leadership and direction come from the coaching staff. This year, head coach Nkrumah Jones received his third Region XXI Coach of the Year honors (also received in 2016 and 2017) and is recognized as having a program win 20 or more games for four-years in a row.

“This is an exciting time in BHCC Athletics,” said Dr. Loreto Jackson, Director of Athletics and Wellness at BHCC. “The Men’s Basketball Program continues to rise to new heights, with several players planning on graduating and being recruited by four-year colleges. For current and prospective student-athletes, these players demonstrate that excellence is fostered, supported and expected.”