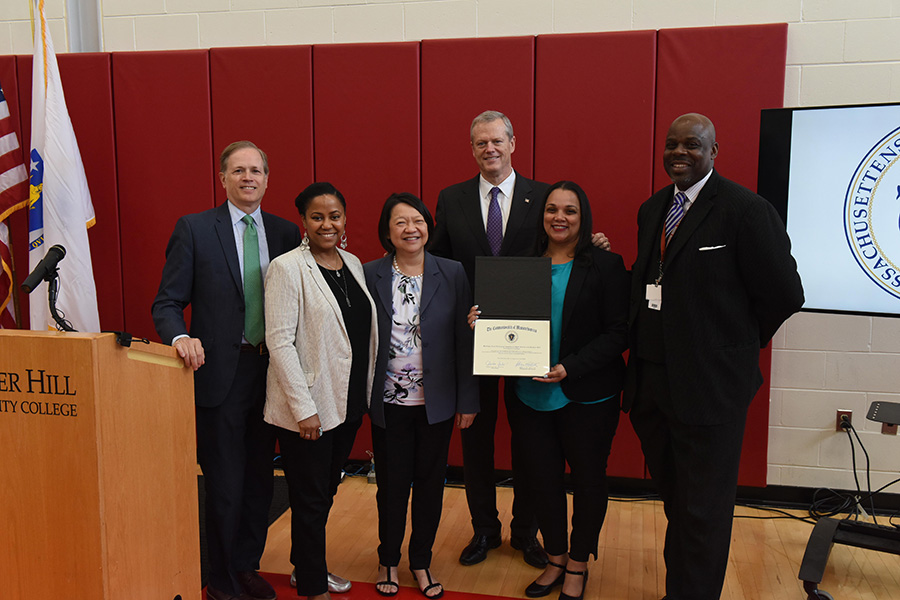 Governor Charlie Baker and Education Secretary James Peyser made the announcement at BHCC during an event recognizing the high schools and colleges that launched early college programs this school year. With the new designations, 35 high schools and 18 colleges will offer opportunities for students that are low-income, minority or potentially first-generation college students to take traditional high school classes with college courses at a local college/university. The goal of this program is to create a continuous path for these students to move from high school to college and careers.

“We believe early college has such an impact on student success,” Governor Baker said. “Our administration proposed making it part of a school district’s state aid calculations so that more districts can provide students with these opportunities.”

The RoxMAPP Early College High School partnership with BHCC has been engaged in curriculum alignment in math and English to develop greater connections between high school and college instructors and to assist greater numbers of students to be college ready in these key subject areas. A “Bridge to Success” curriculum was developed by the partners to provide college exploration and readiness that complements the robust vocational curriculum already offered to Madison Park students. Most early college students take up to two courses per semester at BHCC and select courses in business and marketing, health science, technology, general education and more.

“I’m so proud to see the students, teachers, staff and administrators of Madison Park being recognized for years of hard work and dedication,” said Nuri Chandler-Smith, Dean of Academic Support and College Pathway Programs at BHCC. “A hallmark of the RoxMAPP Early College High School partnership with BHCC is that it enables students to earn both an industry recognized credential and significant number of college credits by the time they graduate high school. Madison Park students have demonstrated that they are capable of excellence and deserve the best of our resources.”

“Early college leverages academics, advising and career literacy,” said BHCC President Pam Eddinger. “In this initiative all students, not just the top 1%, can excel when given the right support and the right environment. I believe this is the practice of equity in our college work, when we stop seeing our students as ‘at-risk’, but at-promise.”