Bunker Hill Community College (BHCC) student Cam Do, along with seven students from all over the U.S., is recognized at this week’s Achieving the Dream (ATD) conference in Long Beach. Do was a participant in the ATD’s Community College Student Leadership Program, a year-long program designed to enhance the selected scholars’ leadership, critical thinking and networking skills. She will receive a $1000 scholarship, sponsored by the community college honor society Phi Theta Kappa. Do read her poem at an opening ceremony in front of 2000 people, “I am from a refusal to surrender… I am from the myth that introverts cannot be leaders. I dare not to be silent. I dare to speak up. I am from poverty to advocacy. I am from insignificance to leadership.” 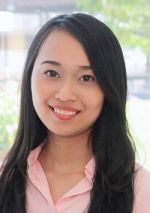 From the encouragement of her parents, Do came to the United States from Vietnam. She knew the best way to escape poverty was through pursuing an education. At BHCC, Do majors in mathematics and holds several leadership positions on and off campus. She served as the Student Trustee in the 2018-2019 academic year on the BHCC Board of Trustees, Vice President of the Asian Cultural Association, Treasurer of S.H.O.C.W.A.V.E.S. Volunteering Club, Student Budget Committee, state-wide Massachusetts Student Advisory Council and Chinatown (Boston) Pao Arts Center’s Branding Committee.

The ATD’s 15th annual DREAM Conference is a convening of experts from colleges throughout the U.S. to examine strategies for critical issues facing two-year and four-year colleges and universities. BHCC President Pam Eddinger gave remarks at the plenary session where she highlighted milestones of ATD over the past 15 years and introduced the ATD scholars, including Cam. Eddinger also presented on a panel discussing innovative collaborations, transforming the student experience: making dreams come true.

The program concludes with a student presentation at the annual conference in front of 2,300 attendees.