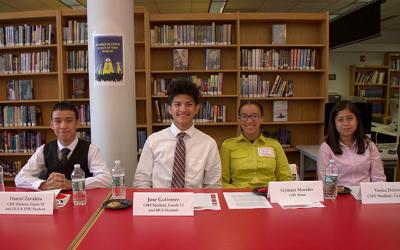 The announcement was made in Chelsea Wednesday afternoon at an event celebrating the early college designation to Chelsea High School’s Early College program by the Baker-Polito Administration. Board Members from The Richard and Susan Smith Family Foundation joined Governor Baker to see firsthand the impact of Early College. At the event, Governor Baker and the legislators in attendance heard from four Chelsea High School students who shared how their experiences in the program influenced their decision to pursue a college-level program.

The funding from The Richard and Susan Smith Family Foundation allows BHCC to consolidate its Early College efforts into a core model that anticipates growth in scale and performance, as well as distillation and dissemination of its promising practices to the field. The $2.4 million grant covers a three-year project horizon and will serve more than 500 high school students, coming from a portfolio of partnerships with high school and community-based organizations in Greater Boston.

“We are so thankful to The Richard and Susan Smith Family Foundation for this extraordinary grant. It allows us to consolidate and scale our early work, to gather data and evidence of success and to make a strong case to the leaders of the Commonwealth that Early College is a viable and scalable solution to talent and economic development,” said BHCC President Pam Eddinger.

An early adopter of Early College, BHCC currently collaborates with seven high schools and community-based organizations, serving nearly 500 early college students in addition to almost 400 participants in dual enrollment. Increasing demand and initial successes with traditionally underserved students and the potential for greater educational equity and student achievement pressed the College to consolidate the Early College efforts into a core model and make it central to the College’s Mission. The grant supports the Early College effort exactly at this important inflection point and gives the College the financial and structural lift to reach the next level of success.

“The Foundation’s Board of Trustees is pleased to be partnering with one of the Commonwealth’s leading community colleges to bring a transformative model proven in other states to Greater Boston. By bridging high school and college experiences, Early College will help many students graduate from high school ready to succeed in college and enjoy the benefits of the Commonwealth’s strong economy,” said Lynne Doblin, Executive Director of The Richard and Susan Smith Family Foundation.

This important work signals a convergence of new thinking from education leaders and policymakers around the State.

“An important goal of the Early College program is exposing students to college-level work while they are still in high school so they can envision themselves on a track toward a college degree,” said Governor Baker at Wednesday’s event. “The college-level experience, combined with the credits they earn in the courses, sets many students up for success by the time they arrive on a campus.”

The Secretary of Education, the Board of Higher Education and the Board of Elementary and Secondary Education all support the effort to recognize Early College work by awarding designations to strong partnerships around the Commonwealth, with the promise of sustainable funding in the near future. These designations, of which BHCC is a part, will stimulate experimentation, document effective practice and demonstrate impact.

The standard-setting work of BHCC’s Early College will be a powerful proof point, and the data to be gathered over the next three years will provide strong evidence as to the efficacy of Early College as a way to increase high school graduation and college completion and broaden career exploration.

Read the press release from the Governor’s Press Office.