Bunker Hill Community College (BHCC) celebrated Mass STEM Week, October 22-26, 2018, with a series of workshops and events. On campus highlights included an interactive 3-D printing workshop and a demonstration of circuits in the College’s new Electrical Engineering Lab as well as a diamond demonstration by the Museum of Science and a presentation by Dr. Girija Goyal from internship partner Refigure on “When, Why & How to deal with Scientific Literature.” 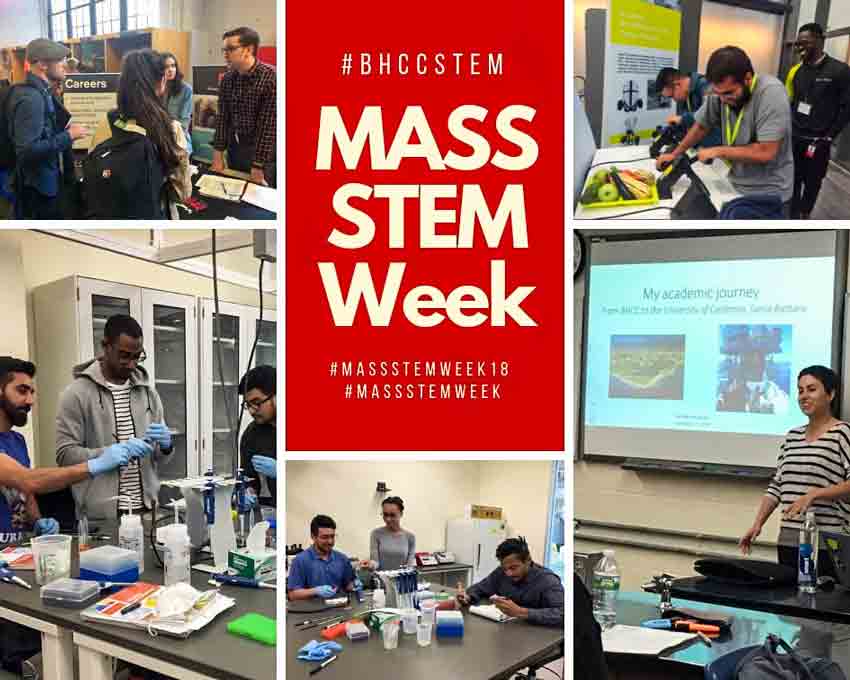 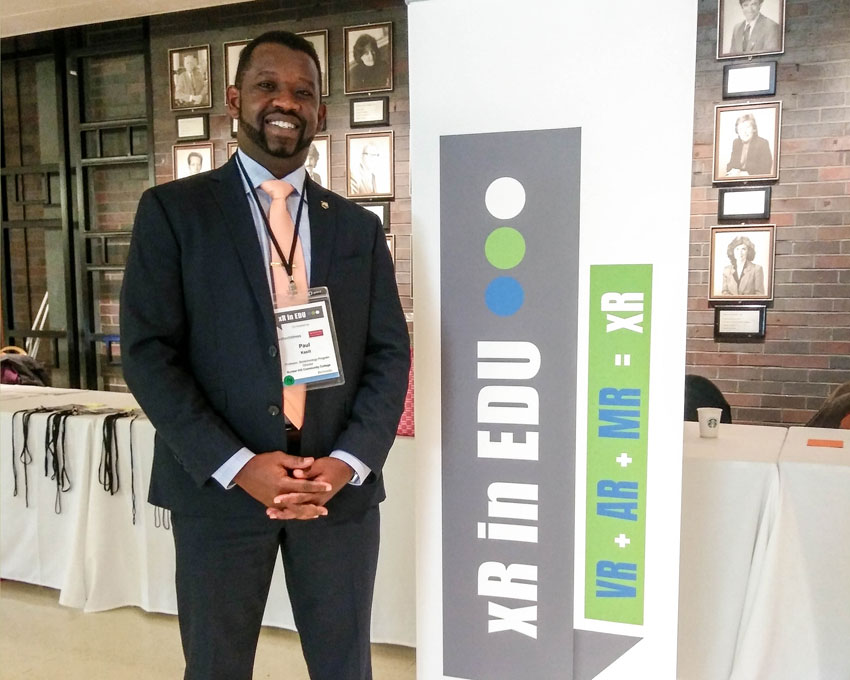 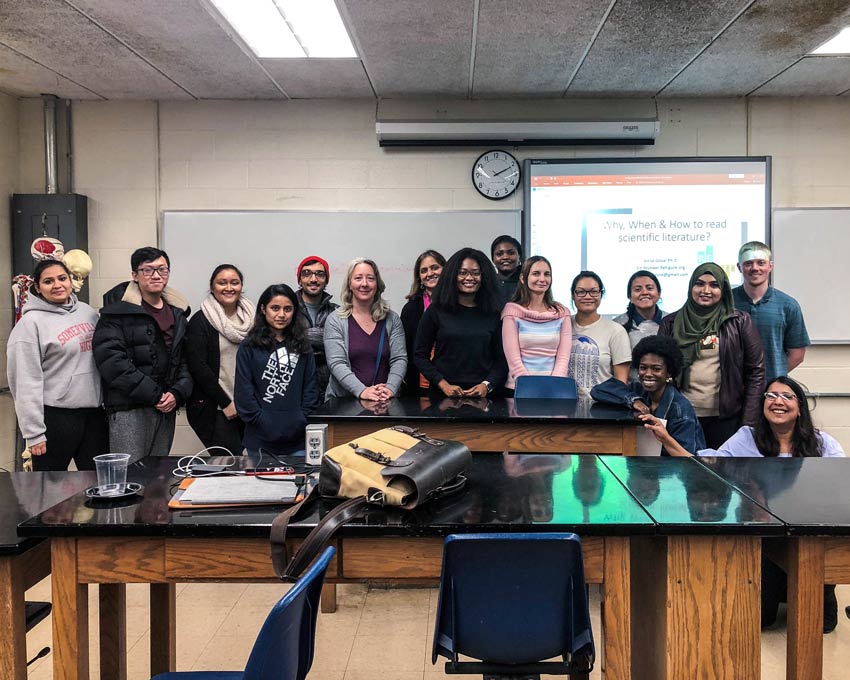 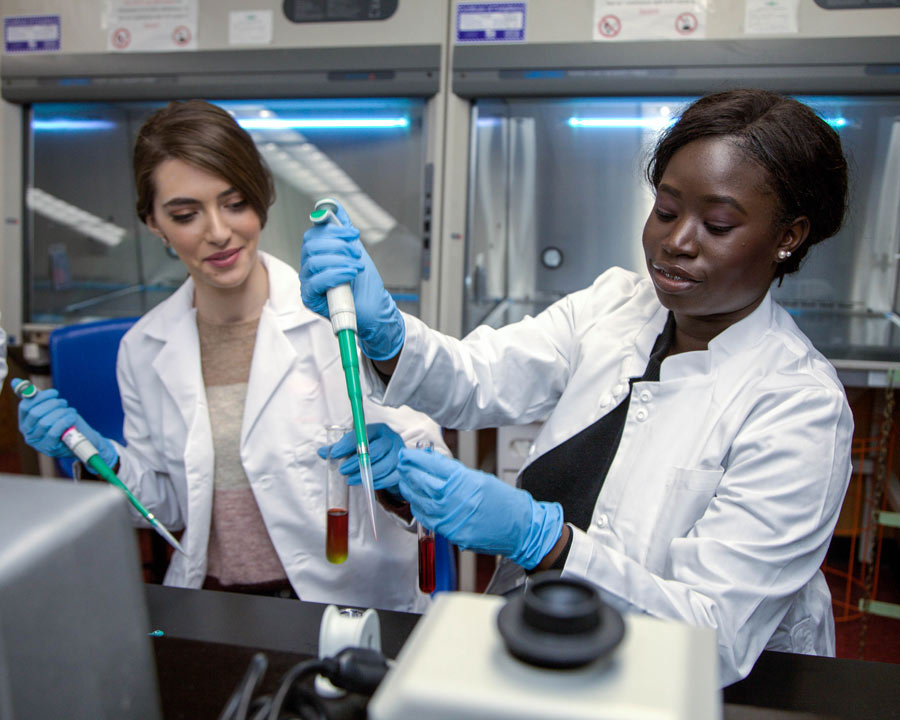 Academic Innovation & Distance Education promoted Open Educational Resources (OER)  with a series of events for Open Access Week including an open house in the Innovation Lab where students could learn more about OER courses and were taught how to search for them when planning their course schedule. BHCC’s celebration of Mass STEM Week also extended beyond the BHCC campus—on October 22, Biotechnology and Genetics Professor Paul Kasili spoke at xR EDU on virtual reality labs in the classroom.

Daily profiles on faculty and alumni in STEM were also created as part of the Mass STEM Week campaign.

Recent BHCC graduate Daniel Villarreal participated in an internship at a lab at Harvard while studying at BHCC. He is currently working as an intern with Cellino Biotech, Inc. On Friday, June 15, 2018, Governor Charlie Baker visited BHCC to sign Bill H4501: An Act providing continued investment in the life sciences industry in the Commonwealth, Daniel attended the bill signing on Cellino Biotech’s behalf.

Named to Bostinno’s “25 under 25,” Veson Nautical software engineering intern Rizel-Bobb Semple credits her courses at BHCC for helping her hone her skills as a developer.

From BHCC to Ph.D., learn about Biology Transfer Alumna Veronika Kivenson’s academic journey and the doctoral research she’s conducted on toxic waste in today’s ocean at the University of California.

BHCC hosted the first annual Science and Engineering Alumni Dinner to celebrate the success of BHCC alumni and thank the many supporters who created research, internship and employment opportunities for BHCC students.

BHCC Board Members in STEM

Board of Trustee member Paul Holzer is the CEO and co-founder of XenoTherapeutics, a company that addresses the global shortage of organs and tissues for transplantation. A former BHCC student from 2010-2012, Paul is a scientist, engineer, and entrepreneur with 15+ years of experience in management, scientific research, and new venture formation.

Prior to XenoTherapeutics, Paul was a Charles Stark Draper Fellow at MIT and trained under Drs. David Sachs and Curtis Cetrulo at Massachusetts General Hospital, in the Transplantation Biology Research Center. Earlier, Paul served as an Officer in the US Navy SEALs, with decorated combat deployments to Iraq and Afghanistan. He left the Navy in 2013 as a Lieutenant Commander (0-4) in the USNR. Paul also completed training as a Paramedic (EMT-P) in Massachusetts and was awarded The President’s Volunteer Service Award for leading a team of first responders to the Philippines following Typhoon Haiyan in 2013.

Paul led a humanitarian journey to the Florida Panhandle in the wake of Hurricane Michael to administer much-needed relief.

Learn more about STEM at BHCC at bhcc.edu/stem

At @BHCCBoston "Why, where and how to read scientific literature" talk, we encouraged students to apply for an internship at #ReFigure and unveiled a new free course for undergraduates to read #papers and #scicomm . #undergraduateresearch #MassSTEMWeek pic.twitter.com/0glYdR1HGl

Video from the Event