On Saturday, May 19, 2018, Massachusetts Secretary of Labor and Workforce Development Rosalin Acosta delivered the keynote address to graduates of Bunker Hill Community College (BHCC) at the 44th Commencement exercises. 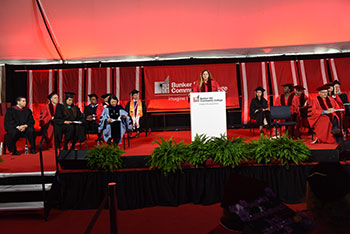 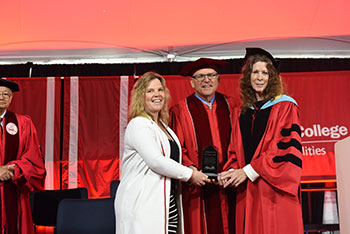 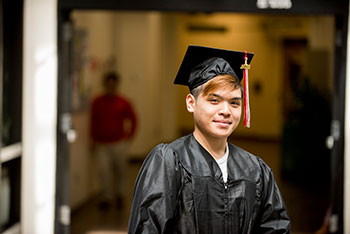 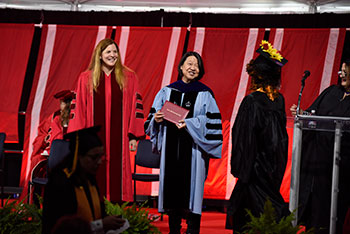 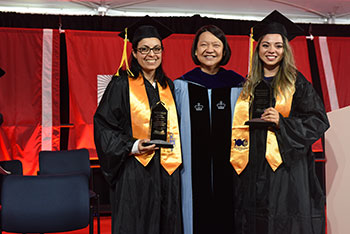 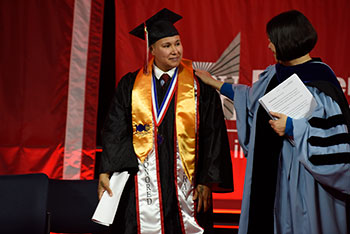 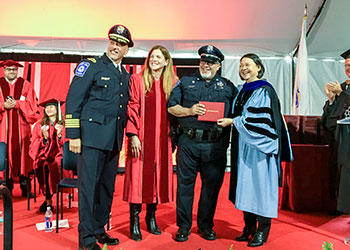 BHCC President Pam Eddinger led the ceremony, guiding the grads through the annual “ritual of gratitude,” thanking family and friends in attendance for their support of the graduates through their journey towards graduation.

“While your days of learning here are done, I will hold you to one more obligation,” said President Eddinger. “I remind you of your obligation to give back—to give back to another generation of learners what you have received from the College, in whatever form that may take. That is your obligation as an educated person, and as a graduate of Bunker Hill Community College.”

Introducing Secretary Acosta, President Eddinger praised her for her understanding of the challenges many BHCC students face and for her dedication to promoting equitable pathways into the workforce through education and training. Speaking to the Class of 2018, the Secretary shared her personal story, one that echoes those of BHCC’s diverse student population.

Born in Cuba, Secretary Acosta immigrated to the U.S. at the age of four and overcame every barrier to achieve her education and succeed in her career in banking and finance. Her success has propelled her into the leadership ranks of Boston where she is now the highest-ranking Latina in the Baker Administration. At the ceremony, Secretary Acosta urged the Class of 2018 to push past the limits of gender and diversity pay inequality. “Demand your place at the highest ranks of the economic and political ladders in the Commonwealth,” she said.

"Industry leaders and universities are partnering to align our workforce training offerings to the needs of an increasingly diverse population,” she continued,speaking to a variety of initiatives being set forth by the Commonwealth’s legislative leaders. “This isn’t just a moral imperative. It’s a business one.”

Prior to Secretary Acosta’s address, the College awarded State Senator Sal N. DiDomenico with the President’s Distinguished Service Award for his stalwart support of high quality and accessible early education for children across the Commonwealth and improvement of economic opportunity for working families. “Perseverance will follow you all of your life. You’ve proven that you can overcome obstacles and succeed,” said Senator DiDomenico.

At the event, William J. Walczak, Chair of the BHCC Board of Trustees, presented the Bunker Hill Community College Hunger Team with the Trustees Distinguished Service Award, recognizing the tireless work of the faculty and staff who advocate for immediate and long-term solutions to college food insecurity and support policy work to move the Hunger Initiative forward.

In 2017, BHCC’s Hunger Team planned and convened the Voices of Hunger on Campus summit, a statewide gathering of colleges and universities aimed at sharing best practices in basic needs services and policies. The convening is now rotating annually to the public colleges to further awareness and momentum, and the Hunger Team is in the midst of a research grant with the Wisconsin HOPE Lab to study the link between food security and college.

Secretary Acosta’s speech was recorded on Facebook Live and can be viewed at facebook.com/BHCCBoston.