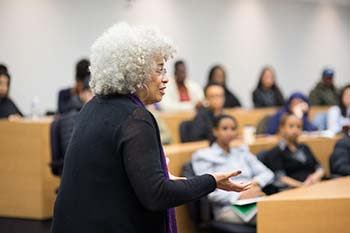 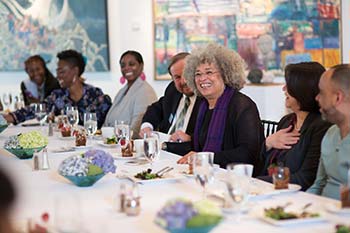 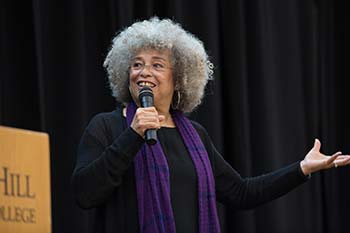 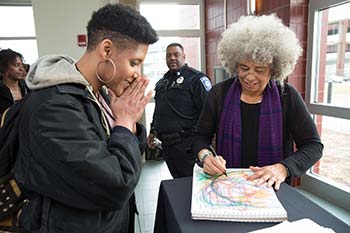 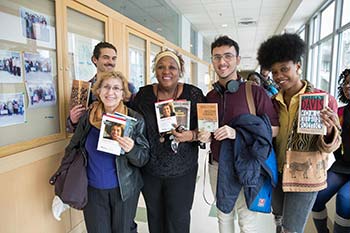 Dedicated to the dismantling of the “prison industrial complex,” Davis’ work includes a persistent theme: the range of social problems associated with incarceration and the generalized criminalization of those communities that are most affected by poverty and racial discrimination.

At the presentation, Davis spoke to the power of building communities of struggle for economic, racial and gender justice, contextualizing her views with historical examples of leaders in organized movements past and present. She discussed the role of Rosa Parks as an organizer for the Civil Rights movement, acknowledging the incredible impact this movement had while at the same time recognizing the work that lies ahead.

“On the one hand, very little has been done,” said Davis. “It feels like we are fighting the same battles as when I was a teenager, but on the other hand, it has changed. We have a better understanding of the issues and we are developing new vocabularies.”

Davis went on to recognize the younger generation for their role in continuing these movements. “What we are witnessing with this insurgency in activism is the result of many decades of struggle,” said Davis, speaking about the high school students from Parkland, Florida, currently at the forefront of the national debate on gun legislation. “The knowledge that is going to drive us forward comes from young people.”

Prior to her presentation, Davis enjoyed lunch in the Mary L. Fifield Art Gallery and met with students studying English. Drawing upon her own experiences in the 1970s as a person who spent eighteen months in jail and on trial after being placed on the FBI’s “Ten Most Wanted” list, Davis urged the students to consider the future possibility of a world without prisons.

“Mass incarceration is linked to inequalities in education and a lack of jobs,” she said. “We need a broader vision of our criminal justice system. Suppose we had a transformative system—a form of justice not based on retribution. Imagine a different society that no longer needs these institutions, where we root out serious problems rather than inflicting punishment or vengeance.”