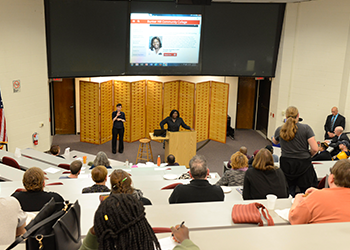 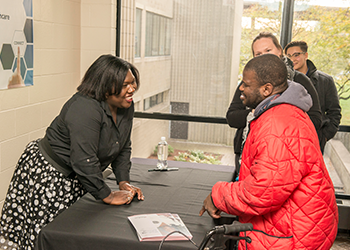 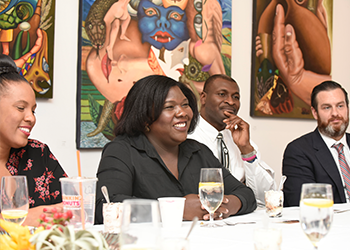 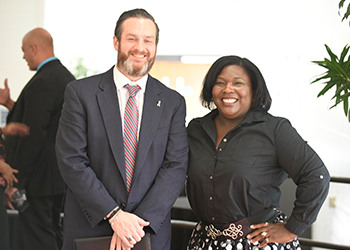 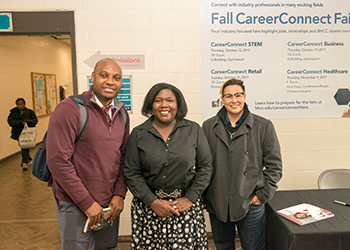 At the event, the NAACP award-winning author of I’m Still Standing: From Captive U.S. Soldier to Free Citizen – My Journey Home captivated the BHCC community detailing the experience of her company’s capture during Operation Iraqi Freedom and the acts of bravery that followed until their rescue by U.S. Marines.

“I still carry the weight and the memory of the things that happened to me,” said Johnson, speaking of the memories and how managing her emotional and mental health is a lifelong journey. “Through therapy, I’ve learned to let go, because all I’m doing is hurting myself,” said Johnson, admitting that she suffers from post-traumatic stress disorder and has been hospitalized three times since her return.

“If we don’t invest in the education we need to steer people toward mental health, we will lose our history,” she continued. “We need to invest the resources in our veterans to get them back into society so that their service does not go by in vain, so they are not forgotten.”

A second generation Army veteran, Ms. Johnson joined the U.S. Army in September 1998. In February 2003, she received orders to deploy to Iraq with the 507th Maintenance Company, 5/52 Battalion 11th Brigade.

A month later, Ms. Johnson was taken as prisoner of war when her convoy was ambushed in the city of an-Nasiriyah. Johnson suffered a bullet wound to her ankle, causing injuries to both legs, and was held captive for 22 days until house raids conducted by U.S. Marines in the city of Samarra, Iraq, resulted in the rescue of seven POWs.

Recognized as the first black female POW in U.S. history and the first female POW of the operation, Ms. Johnson retired from the Army on an honorable discharge later that year. Her awards and decorations include the U.S. Army Service Ribbon, Army Commendation Ribbon, National Defense Ribbon, Good Conduct Medal, Bronze Star Medal, Purple Heart Medal and the Prisoner of War Medal. A native of Panama, Johnson was also awarded the Order of Manuel Amador Guerrero, her home country’s highest honor.

Speaking on the importance of Veterans Day, Ms. Johnson reminded students to participate in politics and within the community. “We need to step up more in our nation, and be more proactive about every aspect of government,” she said. “We think we’re doing something if we post something online, on Facebook or Twitter, but if you don’t vote, if you’re not active in your community, then you’re not doing anything.”

Prior to the presentation, Ms. Johnson spoke to students studying history before enjoying a lunch in the Mary L. Fifield Art Gallery, hosted by the College’s Veterans Center. Recognized as a Military Friendly® School, BHCC is committed to providing veterans, active duty military, Guard/Reservists and their eligible dependents with a smooth transition to college and a successful education. The center serves as an advocate within the college community, providing resources and assistance with community partners.