Massachusetts House Speaker Robert A. DeLeo delivered the keynote address today at the Forty-third Commencement exercises of Bunker Hill Community College (BHCC). The full house of graduates, family and friends gathered to celebrate 1613 degree and certificate recipients, including those who completed their programs from summer 2016 through spring 2017, and those on track to complete their programs during summer 2017. 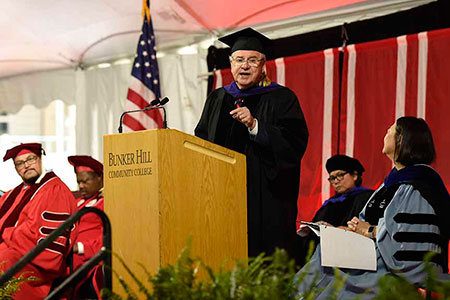 BHCC President Pam Eddinger led the ceremony, guiding the grads through the annual “ritual of gratitude,” thanking family and friends in attendance for their support of the graduates through their journey towards graduation.

“The American Dream wears the faces of many nations, bonded together with hard work and education,” President Eddinger said. “You have seen this here, at Bunker Hill Community College. The American Dream is in the faces of our students, faculty and staff from 107 nations, speaking 75 different languages. We teach. We learn. We are the wealth of America, and we belong.”

President Eddinger introduced Speaker DeLeo, thanking him for his long-term support of public higher education—and of community colleges in particular. DeLeo was champion of the STEM Starter Academy, a community college initiative designed to “inform, engage, recruit, retain and graduate significantly more students through STEM Pathway programs.” For his ongoing support, the College recognized DeLeo with the President’s Distinguished Service Award, the highest honor the College confers on a member of the community.

“With your diverse backgrounds and the sometimes tough routes you’ve taken to get to this moment, you will be assets. You reflect America, and as folks who have often worked your way through school, you have the persistence, character and ingenuity to greatly aid any workplace,” Speaker DeLeo told the graduates. “You, the marvelous graduates of this innovative school, are distinctly positioned to propel the economy and to represent the spirit of Bunker Hill Community College.”

William J. Walczak, Chair of the Bunker Hill Community College Board of Trustees, presented Seabury with the Trustees’ Distinguished Service Award, which recognizes extraordinary commitment and service to the College. “On behalf of the Board of Trustees and our College, we thank Professor Elizabeth Seabury for her dedication to the College, and we offer our sincerest gratitude for her passion and commitment,” he said.

Speaker DeLeo’s speech was recorded on Facebook Live and can be viewed at www.facebook.com/BHCCBoston.

Bunker Hill Community College is the largest community college in Massachusetts. The College enrolls more than 14,000 students on two campuses and at three satellite locations. BHCC is one of the most diverse institutions of higher education in Massachusetts. Sixty-four percent of the students are people of color and more than half of BHCC's students are women. The College also enrolls more than 850 international students who come from approximately 100 countries and speak more than 75 languages.