BHCC’s John Gonsalves Honored as one of '29 Who Shine' 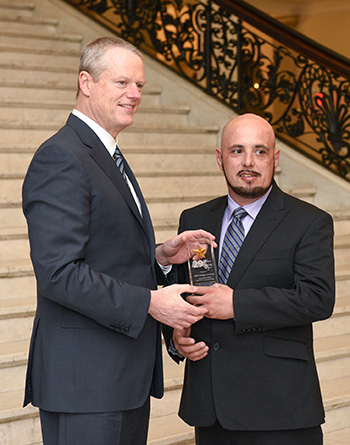 “We congratulate the honorees recognized today for their academic accomplishments and look forward to their continued contributions to the Commonwealth,” Governor Charlie Baker said. “The ‘29 Who Shine’ awards are an important recognition of the impressive work Massachusetts’ college students do to make the Commonwealth’s workforce the best in the country.”

“We are so proud of John for his commitment to academic excellence and leadership,” said BHCC President Pam Eddinger. “We admire his dedication to helping others and know that he will continue to thrive in his future endeavors.”

Gonsalves is an Army Veteran who received a National Defense Service Award for his service as a Combat Medic in Operation Desert Storm. For 22 years, he worked as an EMT for various organizations in the Boston area and trained as a Divemaster. Since coming to Bunker Hill Community College in the fall of 2013, Gonsalves served in a number of leadership capacities. He is a Senator on the Student Government Association, President of the Student Success Club, a New Student Mentor and an ACE Mentor in the Office of Learning Communities. He is also a member of Phi Theta Kappa, where he maintains a 3.7 GPA.

Gonsalves will receive his Associate in Arts degree this May and will continue to study at BHCC’s Medical Imaging Program. His goal is to become a Radiologic Technologist in an emergency room where he can help people when they need it most. He will also spend his weekends putting his SCUBA training to use, teaching people to dive for recreational or life-saving purposes.

Launched by the Massachusetts Department of Higher Education in May 2011, ‘29 Who Shine’ is a commencement season awards program that recognizes 29 outstanding graduates of the Commonwealth’s public higher education system. The student must be a Massachusetts resident who has made an outstanding civic contribution to the state and intends to remain in the Commonwealth upon graduation.