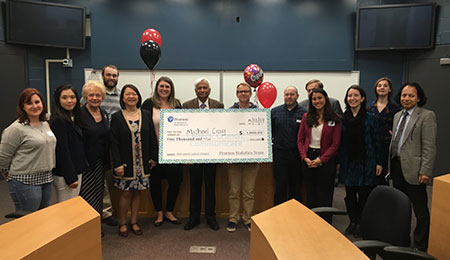 An avid backpacker, Craig’s analysis compared the weight as it relates to the nutritional value of traditional backpacking food–peanut butter, granola, etc.–to that fast food fare. He was awarded a scholarship in the amount of $1,000 for his report, Fast Food Not Fat Enough.

“I started thinking about food in terms of its physical density and nutritional density in different ways,” said Craig to members of BHCC faculty, staff and guests, at a reception last week in his honor. “When I’m backpacking, I need to go out for a week at a time, and I like to carry as little as I can.”

In his research, Craig compared the caloric density, the density of protein and the density of fat of his typical fare with that of fast food. Although not all that surprising, what he found was that most fast food, in terms of density, is not fat enough, and “peanut butter is ultimately your best choice if all you care about is the weight and efficiency of what you’re eating.”