Former Boston Police Commissioner Ed Davis spoke on March 23, 2017, on the need for fundamental reforms to policing and the criminal justice system in America as part of BHCC’s Difficult Dialogues series. 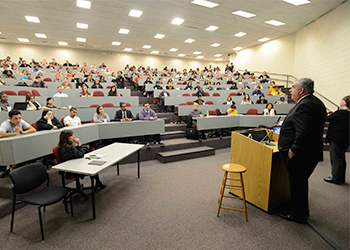 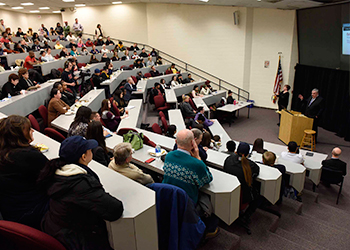 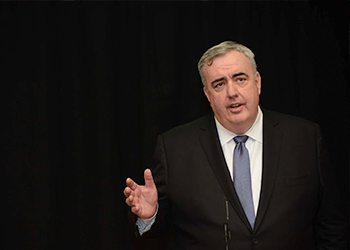 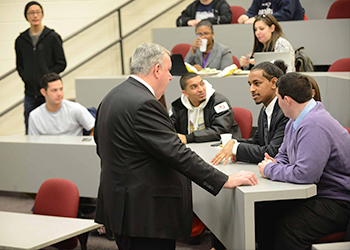 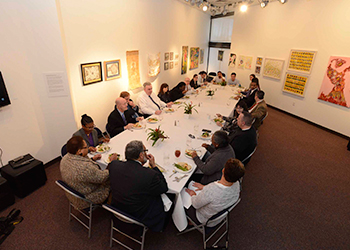 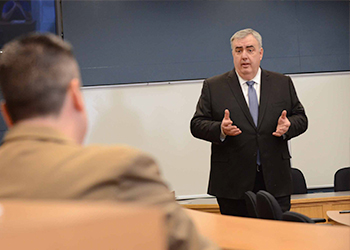 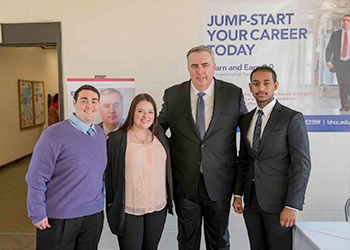 Concluding the College’s speaker series on criminal justice and policing in urban neighborhoods, his presentation, Policing in America: The Changing Landscape of Our Cities and Law Enforcement’s Role in Protecting Our Communities, left the audience with a powerful understanding of the role of law enforcement in the 19th century, and how it relates to the modern challenges we face in the 21st century including cybersecurity, strategic leadership, team-building and decision-making.

Framing his perspective on the crucial role of community policing in bettering areas of society, Davis provided background on the history of police officers in the United States dating back to 1839. At that time, “the police were the public, and the public were the police,” said Davis. “They had the right to arrest, but they were ultimately charged with keeping the peace in their community.”

Born and raised in Lowell, Massachusetts, Commissioner Davis served in local law enforcement for thirty-five years. Coming of age in a police family instilled in Davis an understanding of the relationship between officers and the communities they serve.

He joined the Lowell Police Department in 1978, where he worked his way up through the ranks, adopting a people-centric prevention model to lower crime rates in the city by 50% along the way.

“When I came on in 1978, if you made a murder arrest, you got a medal,” said Davis. “No one asked me to talk to the community, but when I put the resources where the crime was, and employed a different type of attitude, it made all the difference to the men and women in the community.”

In 2006, Davis was appointed Commissioner of the Boston Police Department. Seven years later, he found himself at the forefront of the emergency response to the Boston Marathon Bombing, a role depicted by John Goodman in the film, Patriots Day. In the days and weeks following the bombing, Commissioner Davis led the department and the city of Boston through a harrowing four-day hunt for the bombers, and through the aftermath of putting the city back together.

At a lunch gathering in the Mary L. Fifield Art Gallery, Commissioner Davis reflected on the days following the bombing, separating fact and fiction from the Patriots Day movie to the factual events.

“I wanted the photos to be released to the public,” said Davis in response to a student question regarding tensions between government officials in the hours and days following the bombing. “However the FBI and U.S. Attorney’s Office disagreed.”

The movie depicts this situation as a confrontation, but Davis said it didn’t happen exactly that way. “There was certainly disagreement. However we were able to respect the jurisdiction of the other branches, and unlike the film, the President assured me that whatever I needed, the federal government would provide.”

Prior to the afternoon presentation, Davis spoke to students studying Amendments to the United States Constitution, such as habeas corpus, search and seizure practices pursuant to the Fourth Amendment; self-incrimination under the Fifth Amendment; the right to counsel under the Sixth Amendment; and how these amendments were incorporated by the 14th Amendment and made applicable to both state and federal law enforcement.

There, he spoke to students on a very personal level, answering questions and addressing fears surrounding terrorism and protecting the rights of citizens. He admitted to students that it’s difficult to balance the “trade off of personal liberties for your own safety,” citing the issuing of body cameras to law enforcement as an example:
“Today, everyone has their body camera, and video increases civility on both sides of the equation,” he said. “It’s expensive, but is there a price for the reestablishment of police reputation in this country?”

Commissioner Davis retired from the police force in 2013. Today, He is the President and CEO of Edward Davis, LLC Security and Management Consulting. Throughout his career, he has built a stellar reputation on local, state, national and international levels, serving on the federal government’s teams that reviewed the performance of the New York City and Ferguson, Missouri, Police Departments.

A Fellow at Harvard University’s Institute of Politics, Davis has lectured extensively at Harvard and MIT on cybersecurity and terrorism, and recently signed a deal with FOX News to provide national cybersecurity analysis. He is a frequent contributor to CNN, The Boston Globe and USA Today, and has appeared on Meet the Press and 60 Minutes.