The BHCC Office of Public Safety/Campus Police, the Office of Student Activities and AFSCME joined forces to collect and distribute toys to needy children in the Greater Boston community for the second year running. 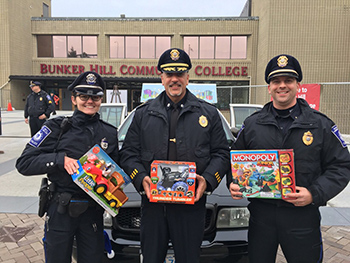 During the annual BHCC Winter Wanderland Holiday Faire and Art Mart on December 8, a BHCC cruiser was stationed on the main plaza of BHCC’s Charlestown Campus, along with BHCC Campus Police officers. Members of the BHCC community filled the cruiser with donations of new, unwrapped, nonviolent toys.

The toys that Bunker Hill Community College collected during the Stuff a Cruiser toy drive filled five bags. Through Toys for Tots, many children received gifts this year due to the continuing generosity of the BHCC community.