Bunker Hill Community College (BHCC) was named one of ten Bellwether Award Finalists in the Workforce Development Category by the Community College Futures Assembly (CCFA). BHCC was selected out of more than 200 applicants. 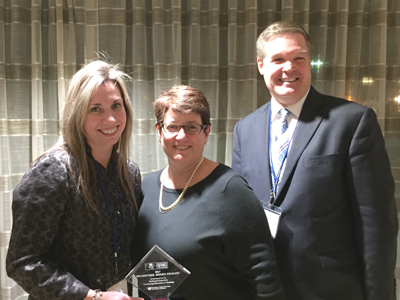 The Bellwether Awards honor organizations that have identified critical issues facing community colleges and have developed solutions that can be replicated nationally. The Workforce Development category recognizes public and/or private strategic alliances and partnerships that promote community and economic development.

Finalists were honored at the Community College Futures Assembly on January 30, 2017, in Orlando, Florida. Clea Andreadis, Associate Provost at BHCC; Sharon Schaff, Director of Career Advancement and Internships at BHCC; and Richard Curtis, Vice President of Workforce Development and Talent Acquisition at State Street Corporation presented at the event.

“We are honored to be recognized for the important steps our College has taken to address workforce needs through our Learn and Earn program,” said BHCC President Pam Eddinger. “The program is a true partnership with some of Boston’s top corporations, combining curricular alignment and real-world experience to prepare our students for fulfilling careers in high-demand fields.”

The Learn and Earn internship program prepares BHCC students for the workplace by providing the opportunity to work in a corporate setting at a major company. Learn and Earn launched in 2011 with the support of Governor Deval Patrick and members of the Massachusetts Competitive Partnership. In the spring of 2012 the College placed 20 interns at five firms, where they worked one or two days per week. Since then, the program has evolved to serve more than 100 students per semester working 16 to 40 hours per week at one of 18 company partners. Students earn $15/hour and are given a transportation stipend. Find out more about the Learn and Earn program at bhcc.edu/learnandearn.

The CCFA is a “think tank” that identifies critical issues facing the future of community colleges. It recognizes Bellwether Finalist colleges as trend-setting institutions. For more information, visit the website, education.ufl.edu or email futures@coe.ufl.edu.

Bunker Hill Community College is the largest community college in Massachusetts. The College enrolls more than 14,000 students on two campuses and at three satellite locations. BHCC is one of the most diverse institutions of higher education in Massachusetts. Sixty-four percent of the students are people of color and more than half of BHCC's students are women. The College also enrolls nearly 1,000 international students who come from 107 countries and speak more than 75 languages.