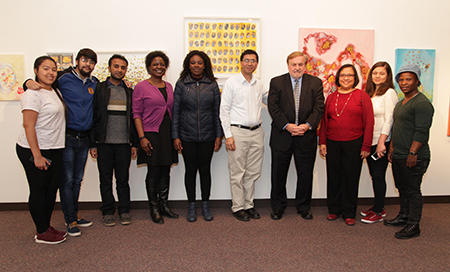 Funded by the United States Department of Education, Humphrey Fellows are young to mid-level professionals from around the world interested in pursuing non-degree graduate-level work and leadership development. Humphrey Fellow Otilia teaches English as a Second Language (ESL) in her native country of Botswana; and Rolando teaches ESL and English as a Foreign Language (EFL) at the Universidad de El Salvador.

As part of the program, fellows apply for residencies at participating community colleges across the United States where they will have the opportunity to engage in the college’s internationalization plan while further developing their knowledge of a unique aspect of the American higher education system — in this case, the ESL program at BHCC.

Earlier this week, Otilia and Rolando visited BHCC’s Language Lab, a high-tech educational environment and tutoring center devoted to enhancing ESL curriculum for students. They also met with Dr. Maria Kathleen Puente, Interim Dean of the Division of Mathematics, Behavioral and Social Sciences. Later in the week, they visited the Chelsea TRiO program, which provides college access services to Chelsea Public School students, many of whom are English language learners.

On Thursday afternoon, Otilia and Rolando also took part in the launching of BHCC’s Title III AANAPISI grant. The grant, which is being launched under the title “Building the Framework for Success” seeks to support and advance the academic success of our Asian American and low income students through a comprehensive reform of BHCC’s ESL curriculum, targeted success coaching and a substantive infusion of local-global learning.

“It’s interesting to me that these students have come to us because they want to develop ways to reform their own programs back home,” said Dr. Puente,  “while we’re also trying to reform BHCC’s ESL programming from intake and admission all the way through student advising.”

Humphrey Fellows bring to light individual challenges and advantages they have in integrating ESL programming in their home countries. Although Botswana is one of the most economically stable countries in Sub-Saharan Africa, Otilia tells us that most ESL teachers are not formally trained, and therefore are not fully fluent in the language. Mostly teaching is done through “code switching” which allows students to stay in their comfort zone, alternating between their native language and English during ESL lessons.

“Since English learning is of minimal instruction in Botswana, it becomes difficult for students to further their education,” says Otilia who hopes to take basic practices that she may incorporate into the curriculum back home. “At Bunker Hill Community College, I’ve visited the Language Labs, and witnessed how they’re using every resource available to teach the subject. I’ve also seen how faculty instructors engage students in learning through group work. They teach the language, and these lessons will help us as teachers to better instruct the students so they learn more.”

Rolando, who describes himself as a lifelong learner, has taught English in El Salvador for more than 20 years. Yet, he describes the Fellowship as a new starting point in his career. “It’s as though I was a newborn baby,” he says, “and now, I am all grown up.” His first visit to the United States, Rolando credits the immersive aspects of the residency with allowing him to learn and understand the cultural aspects of the language. “Back home, I was not conscious about American culture because I was not a witness to it,” he says. “Now I will be able to share a story about America with my students because I have been here, and I will be able to incorporate cultural lessons into my ESL curriculum.”