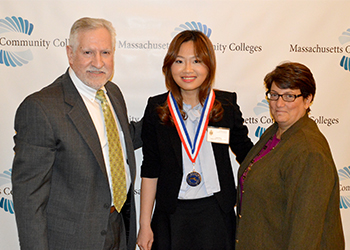 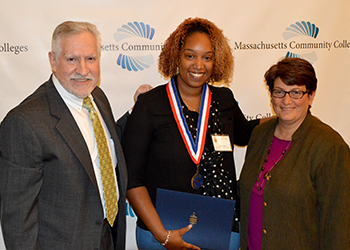 ‌The Massachusetts Community Colleges Executive Office (MCCEO) hosts this event annually at the State House to showcase the best and brightest of the 15 community colleges in the Commonwealth. The event is co-sponsored by the Phi Theta Kappa International Honor Society, the Coca-Cola Foundation and MCCEO. The event featured keynote remarks from Dr. Carlos Santiago, Commissioner of the Massachusetts Department of Higher Education. Dr. John Cox, this year’s Chair of the Community Colleges Council of Presidents, served as the master of ceremonies.

“This event highlights the community colleges’ commitment to access, opportunity, and excellence” said Bill Hart, Executive Officer of MCCEO. “These students show that no matter their background, they can still attain outstanding academic achievement. We’re glad that each year we can showcase these exemplary students in front of their college presidents, families, and legislators in the General Court.”

Photos of the ceremony: https://spark.adobe.com/page/g4nEYFIVyKTDe/