Bunker Hill Community College celebrated Hispanic Heritage Month from September 15 October 15, 2016. A series of events that honored the history, art and culture of Hispanic and Latino Americans was held at the College’s Charlestown Campus and at its campus in Chelsea, one of three cities in Massachusetts with a majority Hispanic or Latino population. Faculty integrated the month’s themes into their art and science curricula. 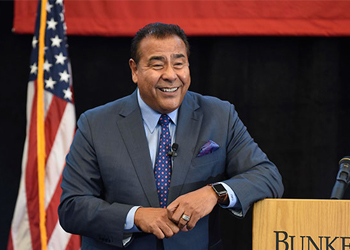 ‌Compelling Conversations speaker John Quiñones, anchor of ABC’s What Would You Do?, capped off the month on a lively note. Quiñones detailed his personal and professional struggle, from his cherry-picking days in Northport, Michigan to his Columbia University fellowship. Quiñones knew he wanted more from his life when his father asked him, “Do you want to do this for the rest of your life, or do you want a college education?”

BHCC Associate Provost of the Chelsea Campus Alice Murillo introduced the speaker to the crowd in the gym. “Mr. Quiñones exemplifies the success that can be reached by determined, hard-working students like each and every one of you,” she told students. “I hope that his powerful story inspires you never to stop working to achieve your goals and pursue your dreams.” Following the talk, students from two TRiO classes at Chelsea High School participated in a question-and-answer with Quiñones.

The celebration began on September 15, with the exhibit Mostly @ Sea, works by Dominican painter German Pérez, in the College’s Art Gallery. It focused on immigration and relocation, memory and the refugee experience, an experience familiar to many attendees from BHCC ESL classes. A reception was held September 21. On September 22, at Chelsea High School, Pérez discussed how art expresses hope with ¡Disfruta! The Power of Community and the Arts.

On September 27 on the Chelsea Campus, educator and Smithsonian Institute historian Donna DeGennaro presented ¡Inspirate! Unlocking Silent Histories, her work amplifying Hispanic voices, identities and heritage. DeGennaro works with youth in Honduras, whose stories are similar to those of many BHCC students.

Halfway through Hispanic Heritage Month attendees listened to readings from local Latin@ writers and BHCC faculty, staff and students on the Charlestown Campus at ¡Escucha! Engaging the Poet’s Voice. Award-winning writer Rhina P. Espaillat spoke about the relevance of being bilingual, and how she creates art that is informed by speaking two languages. Students from several literature courses were in the audience.

One of the final events was led by Dr. Lydia Villa-Komaroff, Chief Scientific Officer at analytical and medical instruments company Cytonome. Dr. Villa-Komaroff visited the Chelsea Campus for ¡Mi Voz! Becoming a Scientist. She discussed how she became a leader in her field. Poised for careers in science, students from several BHCC STEM courses connected with Villa-Komaroff’s story.

To view photos of the month’s events, visit bhcc.edu/hh.

Bunker Hill Community College is the largest community college in Massachusetts. The College enrolls more than 14,000 students on two campuses and at three satellite locations. BHCC is one of the most diverse institutions of higher education in Massachusetts. Sixty-four percent of the students are people of color and more than half of BHCC's students are women. The College also enrolls nearly 1,000 international students who come from 107 countries and speak more than 75 languages.