Twenty-year Army veteran Stephen Snyder-Hill visited Bunker Hill Community College on November 10, 2016, as part of the College’s Veterans Day celebration. In 2011, several days after the repeal of “Don’t Ask, Don’t Tell,” the official U.S. policy on gays serving in the military, Stephen Snyder-Hill, then Captain Hill, was serving in Iraq. 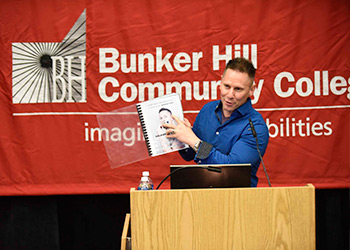 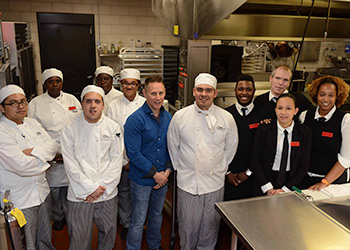 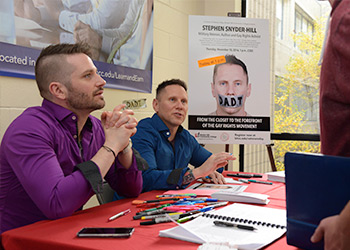 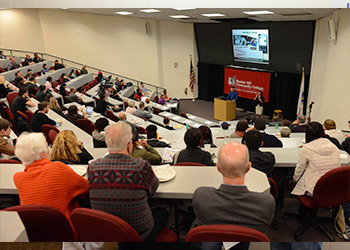 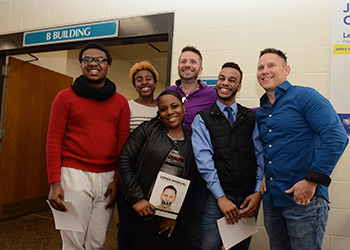 He submitted a video question to a debate among presidential candidates. In the video he asked for the candidates’ thoughts regarding the repeal and their plans, if any, to extend spousal benefits to legally married gay and lesbian soldiers. The debate audience booed Snyder-Hill on national television, and the highly-publicized, homophobic reaction to his question sparked a national conversation on the topic.

Before his presentation, Snyder-Hill visited a Gender Studies class at BHCC. He spoke to students about having to hide who he really was while serving in the Army, and gave them advice. Snyder-Hill told the class, ”I had to make up lies just to serve the country I love."

“Everyone here wants to be an activist. How do you decide, ‘I'm the one to do it?’” asked a student. Snyder-Hill responded: “You have to take the risk. You matter just as much as every single person on this planet. Always trust the power of your voice.”

Another student asked for advice for keeping morale up during times of political change. “We need to have conversations if someone doesn't agree with us,” he said. “We have made so much progress and we aren't going to lose that progress. We are going to keep moving forward,” said Snyder-Hill.

Snyder-Hill joined the military in 1988. He fought in the first Gulf War in Saudi Arabia, Iraq and Kuwait before his honorable discharge in 1996. He reenlisted in 2001 and was deployed to Iraq in support of Operation New Dawn in 2010. Throughout his military career Snyder-Hill has received numerous awards and decorations, including the Meritorious Service Medal.

Snyder-Hill’s story has been covered by news media worldwide. He is the author of the 2014 memoir Soldier of Change: From the Closet to the Forefront of the Gay Rights Movement. Snyder-Hill and his husband Josh travel the country, telling Snyder-Hill’s story and speaking out about LGBTQ rights.