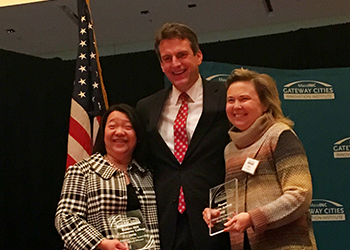 The Phoenix-Bunker Hill Partnership was one of only three recipients of the award, which recognizes organizations engaged in workforce development transformation in the Commonwealth’s Gateway Cities. The Partnership was recognized for the learning lab they are creating in Chelsea, Massachusetts, one of the state’s Gateway Cities. The lab will be located in the College’s Bellingham Square Chelsea Campus building.

“Bunker Hill Community College has been a longstanding presence in the City of Chelsea,” said BHCC President Pam Eddinger. “We are proud to continue to serve the community’s youth in new ways through this partnership with Phoenix Charter Academy.”

Due to the popularity and subsequent expansion of the College’s Chelsea Campus course offerings, the College announced this year that the Chelsea Campus will relocate to its fourth location in Chelsea in January 2017. The historic Bellingham Square Campus will serve as the location for the Phoenix-Bunker Hill Partnership. Community education courses and programs will continue to be held there in the evenings.

“I consider myself an innovator on behalf of students,” said Phoenix Charter Academy Founder & CEO Beth Anderson. “I’m excited to partner with fellow innovator Pam Eddinger and Bunker Hill Community College to study how we can increase college persistence and completion rates with disengaged young people.”

MassINC is a public policy think tank uniting non-partisan research, civic journalism and independent polling, committed to expanding and supporting Massachusetts’ middle class. MassINC was built around the conviction that better outcomes would be achieved if policy makers and opinion leaders were armed with credible data and analysis about key issues surrounding quality of life in Massachusetts.

Founded on the central belief that dropping out of school is preventable for even the most disengaged and off-track students, and that these students can achieve at high levels given the right conditions, Phoenix Charter Academy Chelsea opened its door to 75 students in 2006. Ten years later, the Phoenix Network now serves over 500 students across the state, operating three schools: two Commonwealth charter schools in Chelsea (opened 2006) and Springfield (opened September 2014) and an in-district school in Lawrence (opened 2012). With over 200 alumnae, the Phoenix model breaks the mold and our results reflect this; 100% of graduates have been accepted to college and our students have historically outperformed most sending public school districts on the MCAS assessments.