Cristina Henríquez captivated the Bunker Hill Community College audience of students, faculty, staff and visitors on April 28, 2016, with the story of her development as a writer and the discovery of her Panamanian roots. She spoke as part of BHCC’s One Book program, which brings the entire College community together to read a single book over the course of an academic year. This year, members of the College community read Henriquez’ award-winning novel of immigrant life, The Book of Unknown Americans. 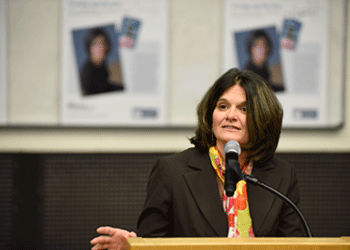 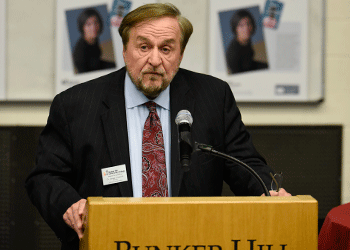 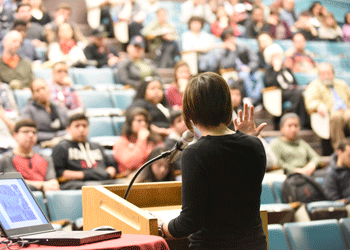 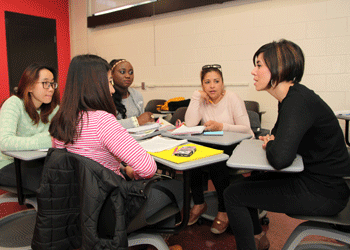 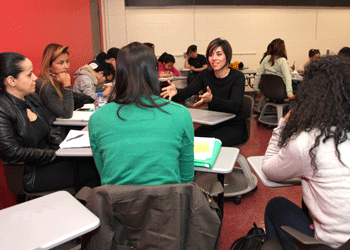 “When people who have been marginalized finally see themselves in books and movies,” she said, “they experience an affirmation of themselves.” Henriquez grew up in a family with an immigrant father and an American mother. Writing the The Book of Unknown Americans, she said, was a way of confirming the Latina side of herself that had seemed secondary to her when she was growing up.

Prior to her lecture in the auditorium, the author visited Professor Alan Shute’s English as a Second Language class, accompanied by Professor of English Jenn Cohn, who directs the One Book program. The author sat down with small groups of students and discussed their personal stories of immigration. Students in the class hailed from Haiti, Vietnam, China, Taiwan and Latin America, among other places. “We are really looking forward to your next book,” said Kelly Tsay, a Taiwanese student studying to improve her English at BHCC. She told Henriquez that she had been a nurse in Taiwan and now hopes to become a nurse in the United States.

The Book of Unknown Americans was named a New York Times and Washington Post Notable Book, an NPR Great Read, The Daily Beast's Novel of the Year, and a Mother Jones, Oprah.com, School Library Journal, and BookPage Best Book of the Year. Henriquez is also the author of Come Together, Fall Apart and a collection of stories, The World in Half.

The One Book program at BHCC is now more than ten years old. For the past five years, the College has purchased copies of the chosen book and distributed them free to students. This year, 2000 copies of the book were distributed. It was incorporated into the curriculum in 83 classrooms and used in courses ranging from ESL to Events & Hospitality, Psychology and American Culture as well as many reading and writing courses.