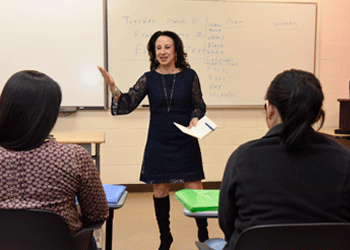 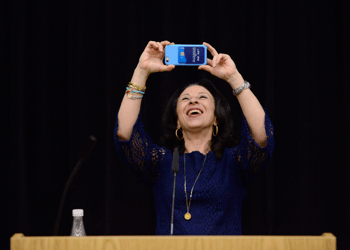 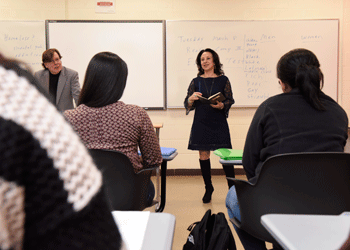 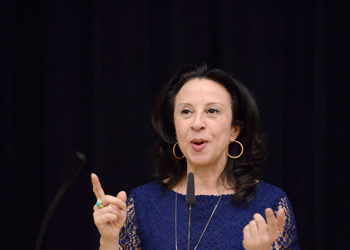 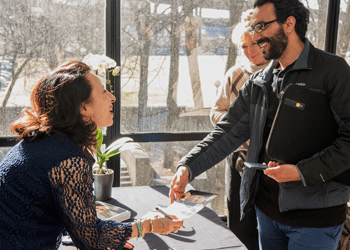 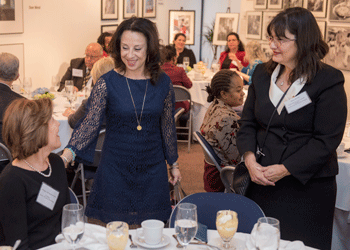 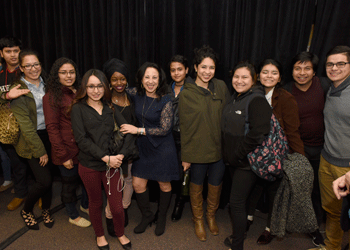 Maria Hinojosa, anchor and executive producer of NPR’s Peabody Award-winning weekly program, Latino USA, spoke about racial inequality in the United States on March 3, 2016, as part of BHCC’s Women’s History Month celebration. “Your challenge right now is to own this moment in history and to own your power,” she told a packed audience, stressing the challenges faced by immigrants in the United States today. “If you can vote, if you can become a citizen, please do. We need you to be voting and we need you to be engaged. The power of history is on your shoulders.”

Before her lecture, Hinojosa sat in on a freshman composition class attended by a group of Chelsea High School Early Start students. Associate Provost of BHCC’s Chelsea Campus Alice Murillo also attended the class with Hinojosa. Following the classroom visit, Hinojosa enjoyed a lunch in the College’s art gallery.

Hinojosa is founder of the Futuro Media Group, which produces both Latino USA and America by the Numbers with Maria Hinojosa, the first public television series to investigate the impact of America’s ongoing population change. Hinojosa is the first Latina to anchor a Frontline report, “Lost in Detention,” exploring abuse at immigrant detention facilities. “It was inspiring for Bunker Hill Community College students to hear this powerful advocate for social justice encouraging them to join the fight,” said President Pam Y. Eddinger, Ph.D.

Born in Mexico City, Hinojosa was raised in Chicago and received her bachelor’s degree from Barnard College. She writes a weekly syndicated newspaper column and is the author of two books, including her 2000 memoir on motherhood, Raising Raul: Adventures Raising Myself and My Son.

Hinojosa’s more than 25 years of reporting have earned her four Emmys, the 2012 John Chancellor Award for Excellence in Journalism, the Robert F. Kennedy Award for Reporting on the Disadvantaged, the 2012 Studs Terkel Community Media Award and the 2007 Edward R. Murrow Award from the Overseas Press Club for best documentary for “Child Brides: Stolen Lives.”