The Posse Foundation has selected Gregory Hardy and John Brindisi as Posse Veterans Scholars for their leadership in their places of work, communities and families. Each Posse Veterans Scholar attends Vassar College, Wesleyan University or Dartmouth College with a “posse” of 10 fellow veterans on a four-year, full-tuition leadership scholarship. Brindisi will attend Vassar College in fall 2016; Hardy will attend Wesleyan University. 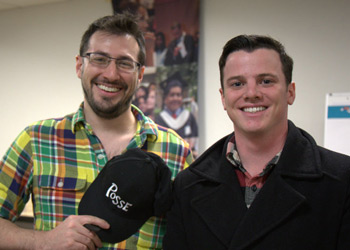 “We are proud of these two talented BHCC student veterans, and thrilled that they have been selected to further their educations at these renowned institutions of higher education,” said Kevin Stevens, Director of the BHCC Veterans Center and Student Services.

Brindisi, a history and government major at BHCC who tutors in the Writing Center, enrolled in 2015 after a stint in the Marine Corps. “My family and I are beside ourselves with excitement,” said the 23-year-old, who cites the help of the Veterans Center, where he now works as a veterans liaison, as a major factor in his success. Brindisi hopes to major in political science and education at Vassar.

Now a member of BHCC’s Alpha Kappa Mu honor society, an ACE mentor, and a student orientation mentor, Hardy served in the Navy and came to BHCC to study education. Near failing after one semester, he found the Warrior Scholar Program, an academic bootcamp for veterans held at Yale University. “Working under pressure and on deadline at Yale gave me the confidence to continue at Bunker Hill,” said Hardy, adding, “I can’t wait to go to Wesleyan.” The education major, who is 37, will graduate in May.

It was at Yale that he met fellow Posse Veterans Scholar and Warrior-Scholar Michael Smith, who also attended BHCC, and who attends Wesleyan. Four other BHCC alumni are Posse Veterans Scholars. Kyle Foley and Robert Mendez attend Wesleyan; Tameka Jones and Jonathan Wood are students at Vassar.

The Posse Veterans Program, which is part of The Posse Foundation, was launched in 2012 to increase the rates at which veterans of the U.S. Armed Forces attend and graduate from selective colleges and universities. It began with partner Vassar College and has since added partners Wesleyan University and Dartmouth College. The program supports up to 500 veterans annually. The Posse Foundation is one of only ten charitable organizations selected by President Obama to receive a portion of his Nobel Peace Prize Award money. For more information, visit possefoundation.org.