BHCC President Pam Eddinger was honored at the National Council for Marketing and Public Relations (NCMPR) District 1 Conference as this year’s recipient of the Pacesetter of the Year award. The award recognizes a community college president or CEO who has demonstrated special leadership and support in marketing and public relations. As recipient of the District 1 award, President Eddinger is automatically submitted as a nominee for the national award, to be presented at the national conference in March 2017. 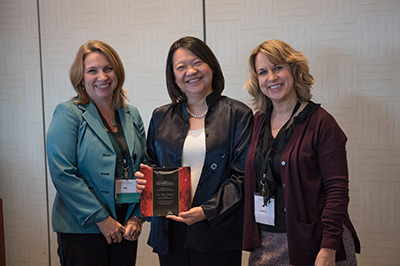 The awards were announced on November 7 in Newport, Rhode Island, at the annual NCMPR District 1 Conference.

NCMPR supports the professional development of community college communicators, serving more than 1,700 members from more than 550 colleges across the United States and Canada. It is the only organization of its kind that exclusively represents marketing and public relations professionals at community and technical colleges and is one of the largest affiliates of the American Association of Community Colleges. NCMPR’s District 1 spans New England and the mid-Atlantic states as well as parts of Canada and the UK.