A crowd of 1,000 participants jostled one another good naturedly at the starting line on a bright November day in Artesani Park in Brighton, Massachusetts. They had assembled to complete the Boston River Run, a 5K celebrating the life of Andrew Graham Narcus. 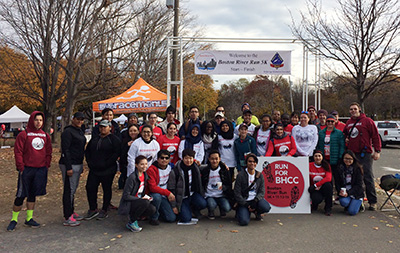 Narcus was a proud U.S. Marine from Sudbury, Massachusetts, who meritoriously earned the rank of corporal in July, 2002. On December 19, 2002, tragedy struck. Corporal Narcus, just 21 years old, was a victim of vehicular homicide while driving home from California for the holidays.

To honor his brother’s memory, John Narcus, a 2014 Bunker Hill Community College alumnus, created the annual Boston River Run 5K in 2011. It takes place on Veterans Day weekend each fall. This year’s race, on November 13, 2016, raised $40,000, exceeding Narcus’s goal for the event. One hundred of the 1,000 runners who participated were members of the BHCC community.

“Andy always impressed everyone with his positive attitude and his strong demeanor. Whether he was being a loving son, brother, friend, teammate or Marine, he carried himself with the highest honor and respect,” said Narcus, who attended BHCC from 2011-2014. In 2013 Narcus received the Trustees' Service Award from the Bunker Hill Community College Board of Trustees; in 2014 he was awarded the Distinguished Service Award.

"All too often, students must sacrifice their pursuit of the American dream simply because they cannot afford to invest in their futures," said Esibi, the 2016 recipient of the BHCC scholarship.

Thanks to the hard work and dedication of a loving brother, fewer students will need to sacrifice that dream.

You can view the photo album for the event on Facebook.