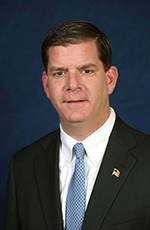 “Mayor Walsh has been a powerful force for public higher education, and a long-time friend of the College,” said Eddinger. “Our students will relate to the story of his educational journey and his path to professional success.”

The Mayor and the College have collaborated on innovative initiatives such as C-Town Tech, a program at Charlestown High School through which high school students can earn credits toward a degree in information technology at BHCC. In addition, the Mayor’s Office of Workforce Development recently engaged BHCC as a Greater Boston American Apprenticeship Initiative Partner to expand apprenticeship opportunities in construction and hospitality through a $3M federal grant.

Walsh was sworn in as Boston’s 54th mayor on January 6, 2014. His work has brought the city an array of awards and honors including the C40 Cities Climate Leadership Group Smart Cities and Smart Community Engagement award and the Society of Professional Journalists’ National Historic Site in Journalism award. Last year his leadership earned Boston the City Livability Award from the U.S. Conference of Mayors. In 2014 he received the Woods College of Advancing Studies first Distinguished Alumnus Award from Boston College.

A life-long Bostonian, Walsh was born and raised in Dorchester. He earned a degree in political science at Boston College while working full-time as a legislator. He served in the Massachusetts House of Representatives from 1997 to 2013, representing Boston’s 13th Suffolk District. Beginning in Laborers Local 223 in Boston, Walsh rose to head the Building and Construction Trades Council of the Metropolitan District from 2011 to 2013.