John Michael Kawooya, a BHCC student working as an intern at Raytheon in Waltham, Massachusetts, has won the national Two-Year Program Student Achievement Award from the Cooperative Education and Internship Association (CEIA). This is the second consecutive year that a BHCC student has won the award. Jared Standish, who interned at EMC in Hopkinton, Massachusetts, took home the prize last year. Both students were part of the College’s Learn and Earn program, which offers students paid internships at top companies in Greater Boston. 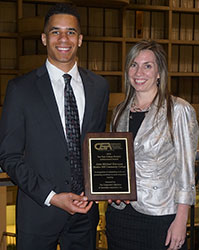 “This is a great testimony to John Michael’s dedication and work ethic,” said Sharon Schaff, BHCC Director of Career Advancement and Internships. “We are thrilled to have long-standing partner Raytheon represented and are grateful for the company’s role in guiding more than 70 BHCC students over the past four years.”

Kawooya received $500 and attended the CEIA National Conference in Dallas, Texas, April 3‑5, where he participated on a panel with students attending four-year colleges or earning their master’s degrees. His remarks won applause from the audience.

Kawooya, a network technology major, began his internship at Raytheon in January 2015. In March he created an asset-tracking algorithm that got the attention of management and is currently adopted within the division. The first IT intern to be hired among 33 BHCC STEM interns at Raytheon, Kawooya said he was grateful for the mentorship and support of his intern manager, Shawn Garside; he accepted a full-time position as a network engineer in August 2015.

More than 435 students have now taken part in the Learn and Earn program, gaining experience in an array of industries, from information technology and financial services to the defense and pharmaceutical industries.

The CEIA has been the leader in work-integrated learning practices for more than 50 years. More than 1,600 colleges and universities are members.