Bunker Hill Community College and MassBay Community College are pleased to announce a student radiology team has placed first at this year’s Massachusetts Society of Radiologic Technologists (MSRT) Buzz Bowl competition. The Buzz Bowl was part of the MSRT 85th Annual Conference. This year’s theme was “Pathways to Excellence in Diagnostic Imaging.” 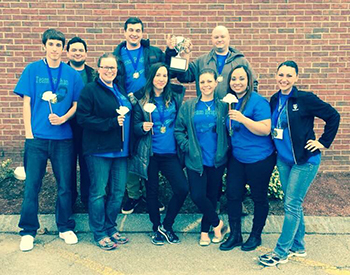 “We are extremely proud of our students’ stellar performance and of the faculty who help prepare the highest caliber of healthcare professionals for the MetroWest region,” said MassBay Interim President Yves Salomon-Fernandez.

"These programs provide an opportunity for our students to put their academic excellence to the test,” said Bunker Hill Community College President Pam Eddinger. “We are pleased to see our students’ hard work being rewarded.”

Brigham and Women’s Hospital selects students based on their competent application of key radiographic concepts and demonstration of professionalism in their clinical practice. The students have been working since fall 2015 in preparation for the Buzz Bowl competition. The Buzz Bowl tests student knowledge on Radiation Protection, Radiation Physics, Radiographic Technique, Patient Care, and Radiographic Procedures. MassBay Community College and Brigham and Women’s Hospital have maintained a clinical affiliation for the benefit of providing practical application of Radiologic concepts in the hospital setting. Brigham and Women’s Hospital Clinical Instructors Victoria Glassman and Tiziana Stuto provide a valuable service to the MassBay students and are greatly appreciated by the MassBay Radiologic Technology Program.

“The BHCC Medical Radiography Program has enjoyed a longstanding and wonderful relationship with Brigham and Women’s Hospital, and many of our students have participated through the years on outstanding Buzz Bowl Teams mentored by their Clinical Instructors and staff, “said Bunker Hill Chair of the Medical Imaging Department and Medical Radiography Program Director Donna Misrati. “Our thanks to everyone at BWH for providing such an educationally sound clinical environment and allowing our students the opportunity to benefit from it.”

In addition, two MassBay Radiology students were also awarded scholarships from MSRT at the annual conference. Victoria Desimone of Waltham was presented with the Oliver E. Merrill/Florence Wakefield Scholarship ($750), named in honor of two extraordinary technologists, Oliver E Merrill and Florence Wakefield, and given to an entry level student in Radiography, nuclear Medicine or Radiation Therapy. Christine Sheehan of Norwood was presented with the MSRT Quarter Century Club Entry Level Student Scholarship ($1,000), which is awarded annually to two entry level students in Radiography, Nuclear Medicine and Radiation Therapy.

Click here for more information on the Massachusetts Society of Radiologic Technologists.

MassBay Community College was recently ranked by the Brookings Institution as one of the top schools for value added and earned salaries in the workforce. Ranked #1 for 2-year colleges in Massachusetts, #2 in New England and ranked #16 nationally. The College’s facilities in Wellesley Hills, Framingham and Ashland house day, evening and weekend classes that meet the needs of degree-seeking students and career minded life-long learners. Online options provide convenience and allow faculty to facilitate the learning process. Since its founding in 1961, MassBay has been accredited by several governing bodies and strives to meet the needs of the diverse local communities it serves.