Bunker Hill Community College’s Learn and Earn Internship Program, in partnership with the program’s founding sponsor, Massachusetts Competitive Partnership (MACP), has received a national Award of Excellence in the Outstanding College/Corporate Partnership category from the American Association of Community Colleges (AACC). A committee of the AACC Board of Directors cited the innovative Learn and Earn paid internship program for its exceptional work in advancing student success. 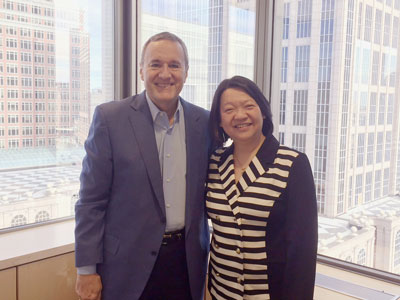 Pam Eddinger, President of Bunker Hill Community College, accepted the award at the AACC Awards of Excellence gala on April 20 in San Antonio, Texas. The AACC represents nearly 1,200 two-year associate degree-granting institutions and more than 13 million students. The Awards of Excellence program was created by AACC to celebrate the truly extraordinary—often visionary—work being done at community colleges.

Working with MACP, the College launched the Learn and Earn program in 2012 with five leading corporations and 20 students. The program, which has now served 347 students, takes students into 15 of Greater Boston’s most prestigious firms, representing every major industry sector in the area. Employers have cited the benefits of working with the College’s diverse population of students, and more than 40 percent of Learn and Earn students have been offered continued work following their internships.

“Innovative programs like Learn and Earn put community colleges at the forefront of providing students with valuable skills for successful careers and providing industry with a competitive 21st century workforce. It has been a pleasure to partner and work with Bunker Hill Community College; President Eddinger and her team have been essential in the successful implementation of the program,” said MACP Chairman Bill Swanson, who is the Retired Chairman and CEO of Raytheon Company. “MACP is excited to continue our partnership with Bunker Hill Community College, and we hope that this collaboration can serve as a model.”