BHCC Magazine, a publication of Bunker Hill Community College, won a gold award in the nationwide communications competition sponsored by the National Council for Marketing and Public Relations (NCMPR). A second gold award went to a digital illustration for the BHCC Magazine feature, “In a House of Books.” 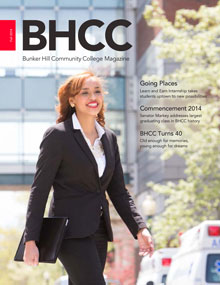 The awards honor outstanding achievement in communications. This year approximately 256 colleges submitted nearly 1,800 entries for the contest. Eighty external marketing and PR professionals from around the country review and score the entries. The awards were announced March 24, 2015, at NCMPR’s national conference in Portland, Oregon.

NCMPR, an affiliate of the American Association of Community Colleges, represents marketing and public relations professionals at community and technical colleges throughout the United States.