On May 28, 2015, Bunker Hill Community College honored high-achieving students with scholarships and awards as student after student ascended the stage to be recognized for outstanding academic achievement or service to the community. Family and friends filled the College gym and cheered enthusiastically as students received hard-earned recognition. 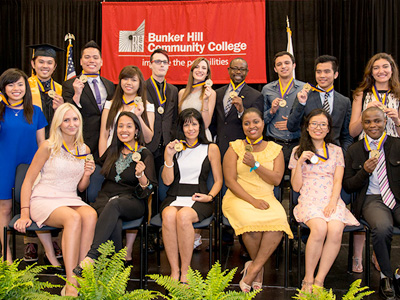 Board of Trustees member Carmen Vega-Barachowitz, Foundation Vice President Carlton V. Aird, and President Pam Eddinger welcomed the students and congratulated them on their achievements.  James Canniff, Provost and Vice President for Academic and Student Affairs, presided at the event.  Malakia Silcott, IT Career Coach and Industry Liaison, addressed the students on behalf of the faculty and professional staff, and student Vince Phan spoke for the students.

Several donors who had provided funding for scholarships through the Bunker Hill Community College Foundation were on hand to present awards to the winning students and have their photos taken with them.  Additional scholarships presented during the event were established by the Student Government Association and the College’s Board of Trustees.

Also honored were the Ruby Anniversary Scholars:  students who received scholarships established by the BHCC Foundation in honor of the College’s 40th anniversary last year.  Students were selected based on their academic achievement and commitment to completing their associate degree in 2015 or 2016.  These scholarships cover financial need not met by federal or state grants or loans.