U.S. Senator Elizabeth Warren delivered the keynote address last Saturday at the 41st Commencement exercises of Bunker Hill Community College (BHCC) to a cheering crowd of more than 3,000 under the Commencement tent on the College grounds. A record-breaking 1,408 graduates received degrees and certificates, the highest number in the College’s history. 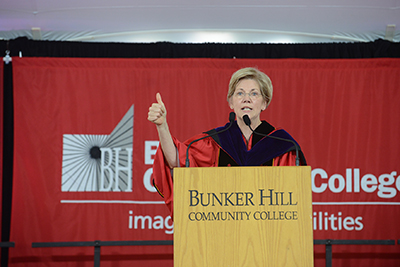 Introducing Warren, Eddinger praised the Senator’s personal triumphs and her advocacy of middle-class families. “Like many of our students here today, Senator Warren was the first in her family to graduate from college. She has been a wonderful friend to the College, and she is a great model for our students.”

“You’ve done something remarkable,” Warren told the graduates. “You’ve faced down the challenges and graduated.  You made this day happen!”  Warren described her battle to create the Consumer Financial Protection Bureau, calling it “a tough cop willing to take on Wall Street and the big banks.” People told her it was a great idea that would never happen. “I kept slugging it out,” she said, until the idea became a reality. “If you want to build something,” she said to rousing applause, “if you want to change something, well, nobody’s going to give it to you, you have to fight for it!”  Following her speech, Warren shook hands with graduates as they crossed the stage to receive their degrees and certificates.

At the ceremony the College recognized Interim Superintendent of the Boston Public Schools John McDonough with the President’s Distinguished Service Award, the highest honor the College confers on a member of the community. The College and the Public Schools have a close partnership of many years, currently focusing on the Success Boston program, which made them allies in preparing high school students to undertake college-level work.

Also honored at the event was BHCC administrator Janice M. Bonanno, retiring this year after 42 years of service to the College in a range of capacities from front-line and managerial duties to crucial leadership roles. Bonanno is Associate Vice President of Student Services and Dean of Students. She received the Trustees’ Distinguished Service Award, which recognizes extraordinary commitment and service to the College.

Visit the BHCC website to view highlights of the commencement season at bhcc.edu/ceremonyhighlights/