On Thursday, May 21, 2015, the College’s athletes and members of the College’s many clubs were honored at a banquet in the College gym prepared by BHCC Culinary Arts students. Director of Student Activities Paul Moda and Director of Athletics Khari Roulhac praised the achievements of the clubs and athletes. 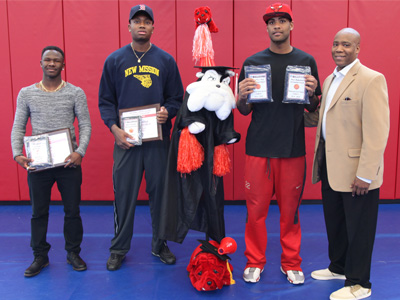 All BHCC teams and clubs were recognized for their accomplishments. The College offers baseball, basketball, soccer and volleyball to students. BHCC clubs represented at the event ranged from Gospel Choir to Business Law.

Two athletes won praise for their achievements in soccer. Salim Bourezgui was honored as a First-Team All-American, placing him among the best players in New England. Rossel Cacho-Sabio was celebrated as a Second-Team All-American.

Cacho-Sabio earned a full scholarship to Le Moyne College in New York. Bourezgui has played for two years, so he no longer qualifies for the team, but he may be returning to BHCC to finish his degree, according to Roulhac.

View more photos from the banquet on our Facebook page.