Grammy Award-winning artist Ice-T spoke as part of Bunker Hill Community College’s Compelling Conversations speaker series on February 26, delivering a lively talk that drew laughs and applause from an overflow audience. Before his presentation, Ice-T enjoyed a lunch prepared by Culinary Arts students and interacted with students in two Learning Community Seminars, “Connecting to Your Inner Orange Line: Next Stop, Community College” and “Do the Right Thing.” 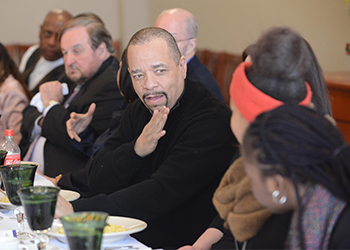 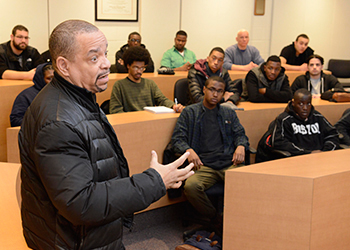 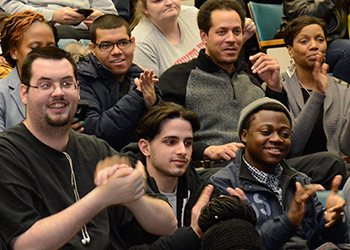 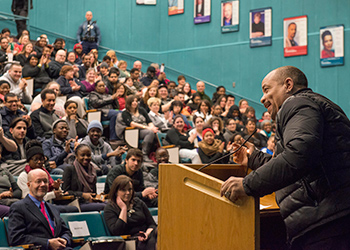 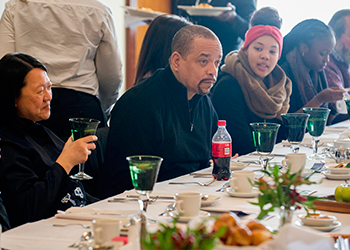 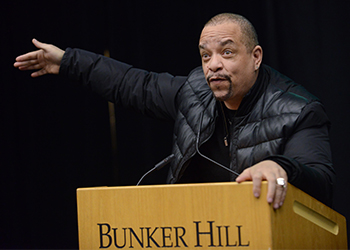 Ice-T described losing both of his parents at an early age and finding a substitute family as an affiliate of the Rollin’ 60’s Crip Gang in Los Angeles, California. He enlisted as a U.S. Army Ranger and served four years, he said, but when a sergeant told him he wouldn’t make it in real life, Ice-T decided to “stop being a chess piece on a board.” Eventually he transformed what he called crime rhymes into a rap career as the self-proclaimed original gangster, and paid his dues in a handful of low-budget films before winning better roles.

Offering encouragement to the largely student audience, Ice-T said, “You are starting from a better place than I did. You’re right where you should be.” He advised students to choose their own path, stay focused and be willing to work hard. After Ice-T’s talk, BHCC English major and veteran Robert Harrigan rapped a rhyme he wrote about suicide and PTSD that won sustained applause from Ice-T and the audience.

Born Tracy Marrow in Newark, New Jersey, Ice-T launched his rap music career in 1984 in the film Breakin’ and went on to record a string of groundbreaking rap records. He subsequently formed the thrash metal band Body Count. His acting career includes roles in the films New Jack City, Ricochet, Trespass, Johnny Mnemonic, Surviving the Game, Tank Girl, and on NBC-TV’s Law & Order: Special Victims Unit, where he plays Detective Fin Tutuola. At 17 years his is the longest running stint for a television cop. He serves as a mentor for at-risk youth.