The BHCC men’s soccer team, the Bulldogs, ended another incredible soccer season with a new high. For the first time in its history, the Bulldogs soundly trounced two higher-ranked teams to advance to the third and final game of the NJCAA National Tournament, held November 12-16 at Herkimer Community College in Herkimer, New York. 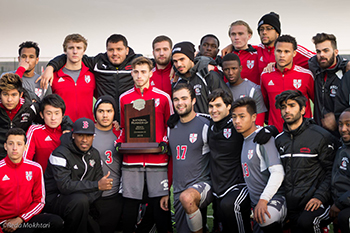 This is the fourth consecutive year that the Bulldogs have won the Region XXI NJCAA New England championship, beating Roxbury Community College and Holyoke Community College this year to become regional champions for the fifth time on November 1, 2015. Their win placed them among the top eight teams in the nation in their division, and qualified them for the NJCAA National Tournament in Herkimer.

The Bulldogs were unranked during the season and were the clear underdogs going into nationals, seeded eight of eight teams. Their regular season had ended with a record of 14-7. “The only people that believed we could win were the people in the BHCC uniforms,” said Head Coach Scott Benjamin.

Featuring a healthy mix of first-year and veteran players and a high-pressure style of play, the Bulldogs upset the top-seeded team, the #1-ranked Genesee Community College Cougars, who entered the tournament with an undefeated, 19-0 regular season record. In the opening round, Bulldog offensive threat, BHCC sophomore Tevin Reid, scored the first goal for the Bulldogs, his tenth of the season, to even up the score at 1-1 in the first half of the contest. First-year midfielder Eric Marakami scored his fourth goal of the season in the second half to put the Bulldogs up for good.

After taking down #1-ranked Genesee Community College, the Bulldogs set their sights on another group of cougars, the #4-seeded Camden Community College Cougars from New Jersey. The Bulldogs had the majority of possession but Camden played a strong defensive style. The two teams remained deadlocked until the nail-biting 81st minute of the contest, when Bulldog sophomore forward Nuno Pereira scored his second goal in three games, his third of the entire season and the game winner. The goal propelled the Bulldogs to the third round national title game.

From underdogs, the Bulldogs almost became top dogs. The team fought hard in the first half, only allowing one goal by the #3-ranked Nassau County Community College Lions. After having a number of scoring opportunities fall short, the Bulldogs gave up three more goals to the Lions to finish as a NJCAA National Tournament Finalist. The new season—and the Bulldogs’ quest for further dominance—begins August 1, 2016.